A Treadmill Desk has the potential of allowing you to exercise while working. I believe it's a viable option, but there are some important caveats.

Which treadmill to choose is tricky, but here's my overview of the market. I've only looked at treadmills that go under a separate standing desk. This is mostly because I already have the electrically adjustable Geek Desk, but I'd strongly urge you to look for separate components. A good standing desk is a great long-term investment, and needs to be built extremely solidly. I've heard complaints from people that some of the other standing desks are not as rock solid as you need. 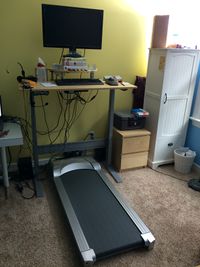 The Rebel Desk is one of the cheapest treadmills that is designed to go under a standing desk. While it's far from perfect, overall I'm pleased with it. Let me start off with the positives:

The Rebel Desk 1000 is not without its weaknesses:

This was my improvised treadmill desk, simply using a plank between the arms of the treadmill. This isn't a terribly safe approach, but it's allowed me to experiment.

I've used my running Treadmill, the ProForm Pro 2000 with a plank of wood over the arms. Over the years this treadmill has withstood fairly outrageous abuse, and while it's showing signs of wear, it's going strong. It's far from ideal as a treadmill desk, as it's bulky and noisy. I never and any problems with the plank of wood falling off, but I used a hefty piece of wood and put some high friction material to limit the chance of slippage. I found that in spite of being a compromised and cobbled together solution, this approach allowed me to verify that I could work at a treadmill desk.