If you'd like to check how accurate your Treadmill is, here's the testing procedure. The simple approach of timing a number of revolutions of the treadmill belt doesn't work because the belt slows down when you're in contact and speeds up when you're in flight. This test evaluates the treadmill while you're running on it, avoiding that problem. I developed this procedure while testing the Stryd Footpod. I'd found that their Footpod is stunningly accurate outside, but seemed to be way off on the treadmill. The folks at Stryd investigated reports from various runners about problems on the treadmill, and they found that many treadmills vary in speed, slowing down when the runner is in contact with the belt. This is in addition to any other calibration problems a treadmill might have.

Besides the treadmill, you'll need a camera capable of recording high speed video, sometimes referred to as "Slo-Mo video". An iPhone 6 or 7 works well, though there are other options. You'll need to place markers at regular intervals along the belt. I used round sticky labels from Amazon that are intended to be color coding dots. You need to measure the distance between the labels, and I used a standard steel rule. I put my phone on a tripod, though you could ask a friend to take the video for you instead. 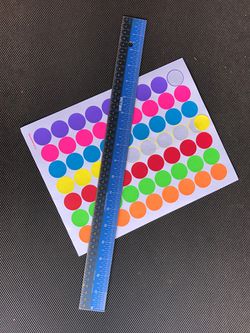 The actual recording is fairly simple. I set up my phone so that it was looking sideways at the treadmill, and slightly above the belt. You need to be able to see when your foot is in good contact with the belt, and see the markers as they go by. You only need to record about a minute of travel, but make sure you let the treadmill get up to full speed. If you have a remote shutter release, you can record only when your speed has stabilized (I couldn't find my remote release when I shot my calibration video.)

I used Kinovea for analyzing the results. It's free, open source software, and you can find some more details at High Speed Video Analysis. I used Dropbox to transfer my video to my PC.

The calculation of pace is fairly simple, and I used Excel. If your timings vary from sample to sample, then you need to average them out. In my testing, I got exactly the same time for each sample which made things easier. I calculated the number of inches per second the belt was moving at by dividing the distance (12 inches) by the time (0.112 seconds), giving me 107 inches/second. This is then converted to miles/hour by dividing by 17.6, giving me 6.087 MPH. Sadly, my treadmill was set to 7.0 MPH, so it's a long way off!

The accuracy of the approach above is limited by the frame rate. This can be offset somewhat by measuring several samples and averaging the result, but it still has some error. This error is because of the marker won't move exactly 12 inches in a given number of frames. An alternative is to measure how far the marker moves in a specified time. You can use the keynote via to simplify this. You need to have some known distance in the image that's close to the markers on your treadmill. If you draw a line in Kinovea you can use that for calibration. Simply noting how far the treadmill marker moves in a given number of frames and drawing a line between those distances will tell you how far the treadmill belt has moved in that time. Calculating the treadmill speed is then fairly trivial. You can actually go a little further, and have calculate the speed for you. If you track a marker using the instructions in High Speed Video Analysis, Kinovea will display the horizontal velocity. You can even ask Kinovea to display a graph of the horizontal velocity against time, as shown below. However, this may give you some rather depressing information, is your treadmill belt may be varying in during different points of your foot strike.

A lot has been written about the difference in running on a treadmill from outside, and what the equivalent pace should be. It's commonly advised that the treadmill pace should be a little faster than outside, or the incline should be set to about 1%. Unfortunately, I've never seen any research to back up this idea, and it would be nice to see some analysis using oxygen consumption as a definition of intensity. It's unclear to me how to compensate for a treadmill belt that varies in speed during the foot strike, as this becomes a rather different running mechanic from running outside.