This is a brief review of a shoe you almost certainly don’t want to buy given the price. While the “Reebok Floatride Run Fast Pro” has a long and impressive name, the actual shoe is good, but not good value. Billed as a competitor for the amazing (if flawed) Nike Vaporfly 4%, the Run Fast Pro is rather ordinary. Don’t get me wrong; it’s quite a nice shoe, or would be if it were also a cheaper shoe without the hype. It’s very light at only ~3.5oz and has reasonable cushioning, making it similar to the legendary New Balance RC5000 (which I still dream about.) However, the RC5000 was only $125 (and often much cheaper), not $250, which makes the Run Fast Pro wildly overpriced. This shoe more than any other shows how far ahead Nike is in producing a faster shoe. Having said all that, if you can pick up a pair cheaply enough, and fancy a lightweight shoe, it’s worth considering. I’ve run hundreds of miles in my pair, with distances up to the marathon and enjoyed them. I’ve found their light weight and quick drying makes them useful for travel shoes. 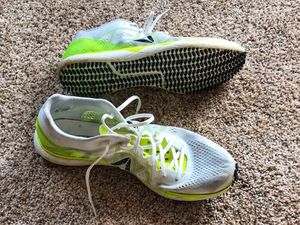 Characteristics • Cushioning . The Run Fast Pro has reasonable cushioning, which is great for a sub-4oz shoe. It’s not particularly bouncy, but given how thin the midsole is, it does a good job. I’m happy to wear it for marathon length runs on good surfaces. The cushioning has lasted reasonably well for me, but after a few hundred miles there’s quite a bit of compression under the ball of the foot. • Drop. The drop of a few millimeters is small enough that I didn’t notice it at all. • Structure. This shoe uses single density of foam, and the sole is reasonably flat. There are no bumps under the arch or cupping of the heel, or anything else to interfere with your biomechanics. • Flexibility. While fairly flexible, there is a bit of spring from the outsole layer. Not enough to make any efficiency difference that I could detect when running. • Outsole. I do like the outsole! The hard rubber nubs create great grip and they’re attached to a springy plate that provides a little extra protection from debris on the road. They also seem to last surprisingly well and look new even after a few hundred miles. • Shape. The shape is typical of most running shoes, with no room for your toes to move or spread out. I didn’t cut the toe box open as I wanted to use them as a travel shoe while touring Japan. (The light weight makes them ideal for a travel running shoe.) • Upper. The upper is reasonably thin and unpadded as you’d expect in a shoe this light. It’s reasonably breathable and comfortable. • Tongue. The tongue is sown in on the medial side, and stays in place okay. It’s very thin, and getting it flat when you put the shoes on can be a bit of a trial. The lack of padding didn’t cause me an issue, but it might if you’re sensitive on the top of your foot. • Lacing. The laces work well and remained tied. • Heel Counter. There’s really nothing you could justify calling a “heel counter”, which is nice.