From Fellrnr.com, Running tips
(Redirected from Do not pause your watch)
Jump to: navigation, search 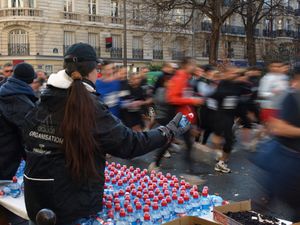 Some aspects of racing are hard to simulate, like aid stations in a marathon. (Image by Nilson Menezes)

The Golden Rule of Racing is never do something in a race you have not practiced in training. To avoid breaking this rule, it is necessary to do some race simulation. A race simulation is where you try to re-create as many of the race conditions as possible, while avoiding the stress and recovery time of the actual race. For 10K and shorter races, race simulation is not necessary as recovery from these races is short enough to allow for frequent racing.

There are several ways of simulating a marathon race.

Ultramarathon race simulation is generally trickier. Many of the issues encountered in an ultramarathon occur after numerous hours.

With some thought and planning, training runs can be used as race simulation. There are a number of aspects that must be considered when using this approach.

Taking a break during your long training runs is okay, and can even be an important part of training. For instance, a walking break can increase the distance you can cover on a long run. These Walking Breaks obviously vital if you're intending to race with a run/walk pattern. However, if you pause your watch during a break, you can get into problems. Having done a 20 mile run with 3 hours showing on your watch, you assume you can run 20 miles in 3 hours (9 min/mile). If the watch was paused for 20 minutes for toilet breaks, waiting for people to catch up, changing clothes, etc., you actually did 20 miles in 3 hours 20 minutes (10 min/mile). If you then try to race a marathon at 9 min/mile pace, you will be surprised by how tough it is. This also means that if you have a GPS with an 'auto-pause' feature, you need to turn that off as well.

It is important that the race simulation mimics the elevation profile of the actual race. Training on the flat for hilly race has obvious problems, but training on hilly terrain for flat race is also a mistake. Gentle hills tend to provide variety in which muscles are used at any given point, and some runners find that the flat race causes them problems because of the lack of this variety. The other problem that can be encountered when training for a hilly race is the length of the hills. Running many small hills does not replicate running a few long hills even if the gradient is the same. The Delayed Onset Muscle Soreness that comes from Downhill Running is greater on longer hills then multiple short downhills.

It is obviously hard to replicate the taper in training without having a huge impact on the training schedule. However, it should be possible to perform a very short 'micro taper' that will help understand how the taper affects your running. A weeklong taper, which training volume is cut back while intensity is maintained should not affect your training should feel unduly. Understanding how different tapers work for you is important. The Science of Tapering has shown large individual variability, so trying different taper patterns and different taper nutrition will help you decide what works for you.

Not only should race simulation mimic the fueling you intend to use on the actual race, but it should also mimic the nutrition the day before the race. Experimenting with different meals the night before the race and the race day breakfast will help determine what works best for you.

Hydration may require some thought and preparation. Ideally you want to replicate the hydration that will be available on the race itself as much as possible. Try to find out what will be available and buy some for your race simulation. This is generally more for problem on marathons than ultramarathons, as ultramarathons typically have a wide variety of drinks. Bear in mind that the drinks of marathon races are typically poorly mixed and that you are only getting a small amount in a paper cup at each aid station.

The start time of your race may be different to your normal running time, in which case you should aim to replicate this aspect as well. If you have to get up extra early to travel to the race, this is another aspect that can be simulated.

4.7 The Golden Rule of Racing

All of the points in The Golden Rule of Racing apply to race simulation.