Knowing how many calories you burn during exercise can be useful both for weight loss and overall health. If you're trying to lose weight, then burning more calories may help, and if you're on a calorie controlled diet, then understanding your calorie burn becomes critical for managing your calorie intake. Understanding how fast your burning calories also has an implication for overall health, as it's a useful measure of exercise intensity. If you're running, you burn the same number of calories per mile regardless of speed. That means the rate your burning calories is directly proportional to your pace. Walking is rather different, and the faster you walk, the more calories it takes to cover each mile. The calories burnt in both running and walking are also directly proportional to your body weight, so the heavier you are the more calories you burn. In addition, you obviously burn more calories it going uphill than on the level, and for modest slopes you burn less calories and going downhill. This page will allow you to estimate your calorie burn for different paces and slopes. By default, this page shows the values for a 150 pound person, but you can use the form below to customize it.

1 The Difference Between Running and Walking

Running and walking are two different forms of movement. In running you either have one foot on the ground or both feet in the air; both feet are never on the ground at the same time. In contrast, when walking you either have one or both feet on the ground and never have both feet in the air. Sometimes people think that basic physics means that it should take the same energy to move a human over a given distance regardless of running or walking. However, both running and walking are quite inefficient, so most of the energy expended does not go to forward movement. This is most easily seen when you compare a runner with a cyclist; for the same effort, the cyclist will move far faster. This means that the energy cost of running and walking is mostly around how much energy is wasted in each form of movement.

2 Do You Burn More Calories Running or Walking?

Generally, the answer is that running burns more calories per mile than walking, but as is so often the case, the real answer is "it depends".

3 Should You Run or Walk in an Ultramarathon?

The table below gives some insight into when you should run and when you should walk in an ultra. This table shows how the slope would change your pace if you keep the same effort (Calories per hour). The first column is the running pace on the flat, then each column shows the pace you would travel if you run or walk on various slopes. The table is based on the available research, and there are obviously some practical limitations that make some values unreasonable for most people. As noted above, it's more efficient to walk than to run on level ground, up to the natural transition pace of about 14:00 min/mile. What's surprising is that it is also more efficient to run than walk on uphill sections, even as the equivalent pace drops. So, if you're able to run at a 10:00 min/mile on the flat, you could go up a 10% grade with the same effort at 16:35 min/mile when running or 17:39 min/mile when walking. This seems rather bizarre when both paces are below the natural transition pace (see below), but when I tested this out I found to my surprise it appears to be true. That doesn't mean you should run up the hills, as walking may be a useful break and using different muscles may help with fatigue. In addition, unless you've practiced race walking technique it's unlikely you'll be able to efficiently hit the faster downhill walking paces, where you may be able to hit the downhill running pace. For example, if you're running a 10:00 min/mile pace on the level, you may be able to handle running the 5:59 min/mile pace down a 10% decline, but few people will be able to walk at a 7:28 min/mile pace down the same slope. So it may not make much difference if you take walking breaks uphill or on the level, but you don't want to take them on the downhill sections. (In the table below, I've used a blue font where the walking pace is faster than the equivalent running pace.)

4 The Effect of Incline

It's intuitively obvious that running or walking uphill is harder than level ground. It's also reasonably obvious that modest downhill slopes are easier than level ground, but as the slope increases so the difficulty becomes greater. Scientific research has supported and quantified this[1], showing that the energy cost of walking or running is to lowest at about 10% decline. There is some evidence that the slope of minimum energy is independent of pace[2]. This slope of minimum energy requirement seems to corresponds with the slope that neither requires pushing back for forward movement nor energy dissipation for braking[3]. The two graphs below show the relationship between slope and the cost of walking/running as measured by a number of studies.

There are a number of factors that could change these assumptions:

5 The Transition Between Running and Walking

The energy required to run a given distance is the roughly the same regardless of pace. This is different to walking, where the energy required to walk a given distance generally goes up with pace. This means that at slow speeds, it costs less energy to walk than run, but as you go faster it becomes easier to run. When people are put on a treadmill and the speed gradually increased, they will naturally transition from walking to running. This transition occurs at roughly the same speed for most people and is called the Preferred Transition Speed (PTS)[6]. You can see this in the two graphs below. The graph on the left shows the energy expenditure over time, showing the energy required to walk goes up faster than for running. The graph on the right shows the cost per distance, with running staying constant and the cost of walking rising with pace. (It takes more energy to walk a distance very slowly, so the graph shows the low point which is the lowest energy cost to cover a distance.)

This table shows the number of Calories used per hour for a person weighing 70 Kg.

This table shows the number of Calories used to cover a Kmfor a person weighing 70 Kg.

The graph on the below shows that there are slight, non-significant differences between runners and active non-runners. This indicates that training does not change the transition speed, though it's worth noting that the actual transition speed is slower than would be expected from the energy costs[6]. Also note that the actual cost of running is not quite constant with speed, but actually goes down as you go faster. 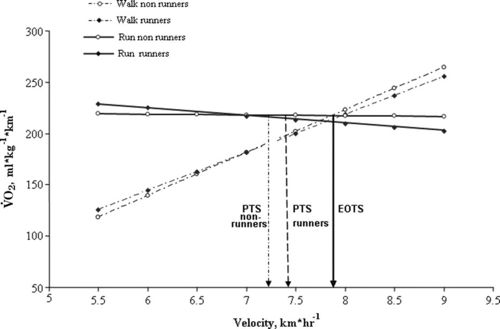 for those who like to create their own tables, below are the underlying formulas that I'm using. The cost of running (Cri) and walking (Cwi) on a slope is given by these equations:

Where i is the slope and the result I in Jules per Kg per Meter.