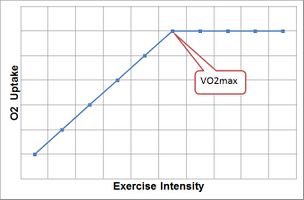 A graph showing that O2 consumption increases with exercise intensity until a maximum is reached, which is V̇O2max.

V̇O2max is the maximum (max) volume (V) of oxygen (O2) you can use during exercise. Measuring V̇O2max requires specialist equipment, but there are many locations with the facilities and the cost is usually under $100. The procedure involves running on a treadmill while wearing a mask to capture your breath. There is a warm up period, and then you run at a reasonably stressful pace while the treadmill gradient is steadily increased until you can't keep going. For most of the test, as the workload increases so does the O2 you use. However, there will come a point where the increased workload does not have a corresponding increase in O2 usage. This is the point where you are using as much O2 as you are capable of and the increased workload is coming from anaerobic systems. While V̇O2max is interesting, it does not include details of Running Economy, so it does not give a complete picture of a runner's capabilities. Arguably, VDOT is a more useful measure of fitness.

V̇O2max can be estimated from a race performance, and this is implemented in the VDOT Calculator. Another approach is the Cooper test developed in 1968 found that the distance that could be covered in 12 minutes was strongly correlated with VO2max[1]. However, the Cooper test requires a lot of motivation and a good sense of pacing, as 12 minutes is a relatively long period for this type of test[2]. A similar technique is to increase running speed every two minutes until exhaustion, then VO2max can be estimated from the maximum speed that was achieved using Léger & Mercier formula:[3]: 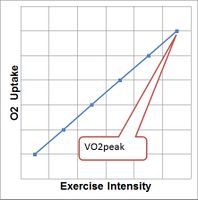 This graph shows that V̇O2peak, which is the highest O2 observed, without the plateau that defines V̇O2max.

Some research uses the term V̇O2peak rather than V̇O2max, and while the two are similar, there is an important difference. Where V̇O2max is the highest O2 uptake seen, even though exercise intensity has continued to increase, V̇O2peak is simply the highest O2 seen[4]. It's possible for V̇O2peak to be the same as V̇O2max, but only if the test is terminated at just the right point. The biggest problem with V̇O2peak is that a training program might result in a subject getting better at the test, which would result in a higher V̇O2peak value, without actually changing their V̇O2max. For instance, I might have a V̇O2max of 60, but find the testing protocol so hard that I give up when my V̇O2 reaches 50 which would only give a V̇O2peak value. If I do some high intensity training, I'd be more comfortable at these high workloads and I might reach a V̇O2peak of 55, which would look like a 10% improvement, but is actually not a change in physical fitness.

The velocity that is reached at V̇O2max is called vV̇O2max, and the time that vV̇O2max can be sustained for is called Tlim or Tmax.