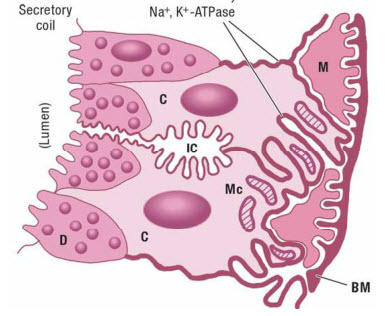 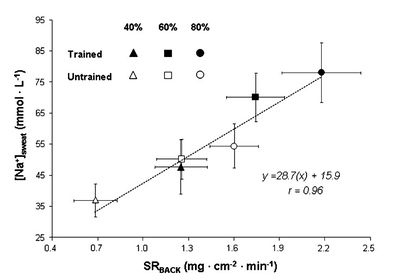 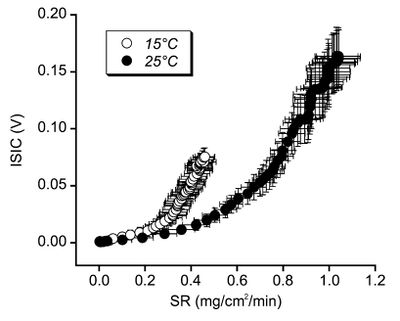 The human body is very good at maintaining its sodium balance under most conditions. The higher your sodium intake the higher the sodium losses in sweat and urine. There is evidence[11] that under moderate sweat rates and a restricted sodium diet that the sodium concentration of sweat can drop to extremely low levels. However, I have found no evidence to suggest the sodium retention is effective at higher sweating rates.

Sweat rates in male runners have been measured in the range from 0.75-2.23 in winter to 0.99-2.55 in the summer (Liters per hour)[12]. At the low end, we can imagine a fit runner finishing a 3-hour marathon in winter and sweating only 2.25 Liters. Assuming they are also heat acclimated, they would only lose 2 grams of sodium, which is 5 grams of salt, less than a teaspoon. On the other end of the scale, a fit, but unacclimatized runner completing a 5 hour marathon in summer would sweat out nearly 13 Liters, 18 grams of sodium, which is 45 grams of salt or more than 7 teaspoons. There is a table showing a range of values at Sodium Loss.

Hyponatremia is where the sodium (salt) levels becomes too dilute. Initial symptoms tend to be a gain in weight and a general swelling and 'puffiness', most noticeable in the hands. More severe symptoms are caused by a swelling of the brain (cerebral edema) including nausea, vomiting, headache and malaise[13].

Generally, Hypernatremia (too much sodium in the blood) seems to be a result of dehydration rather than excessive salt intake[14]. It should be noted that taking Electrolyte Capsules bypasses the body's taste. This sense of taste seems to reflect our body's internal sensors; our desire for salty foods reflects our salt requirements.

The scientific evidence shows that caffeine is generally not a diuretic[17][18][19]. Previous studies have shown that if you don't normally take caffeine and then get a large dose, there is some diuretic effect. However normal intakes of caffeine by non-users and use by regular users is not a diuretic[20]. (If you urinate more because you drink a 20oz Latte, it is because of the 20oz of fluid, not the caffeine.) Alcohol is another story; drinking anything stronger than 2% will cause dehydration. Because alcohol takes 36 hours to clear the body, it should be avoided for 48 hours before you wish to avoid impaired performance[17].

These symptoms are for the general public, and there is evidence[22] that they may not apply to athletes suffering from mild dehydration