From Fellrnr.com, Running tips
Revision as of 15:19, 25 March 2017 by User:Fellrnr (User talk:Fellrnr | contribs) (Created page with "Stryd is one of the most useful and impressive running technologies available. While a lot of the Stryd marketing focuses on their "running power meter" functionality, I see t...")
(diff) ← Older revision | Latest revision (diff) | Newer revision → (diff)
Jump to: navigation, search

Stryd is one of the most useful and impressive running technologies available. While a lot of the Stryd marketing focuses on their "running power meter" functionality, I see the greatest value coming from their accurate measurement of pace and distance. If you look at my testing of GPS Accuracy, you will see that Stryd gives a far more accurate measurement of distance than any GPS watch. It accurate enough that it really doesn't need any calibration, and unlike GPS, it should work in any situation. Not only is it providing accurate distance measurement, but it provides real-time pace, something that's impractical to achieve with any GPS device. While I believe Running Power Meters are quite different to cycling power meters and are more of a "power estimate" than a meter, I think that if you understand their limitations they can still be useful. At $200 I think that Stryd is good value for money, and it's one of the few running devices that I would replace unhesitatingly if I lost it. Currently Stryd is only available via their web site. (I don't have any affiliate or sales link with Stryd.)

Stryd provides an array of different metrics, which vary both in accuracy and usefulness.

Note that Stryd provides no information on foot strike parameters such as pronation, or foot landing position.

The Stryd pod is similar to other Footpods. It's slightly larger than most, and has an LED status light on the top. Stryd uses a rechargeable battery that they claim lasts about 20 hours. That's good enough for most runners, but may be a problem for longer ultramarathons. Stryd recharges wirelessly, which is nice, as I hate fiddling around with connectors or losing specialist cables.

Stryd has remarkable levels of integration with a wide array of running watches. It supports both Bluetooth and Ant+, and it can look like a standard Footpod, or a cycling power meter. There are a large number of combinations of watches and configurations to consider, and I will return to this issue and update this section in the near future. I'll also include some recommendations of the best watch is to use with Stryd.

The Stryd app is rather limited, and I mostly use it just to sync data with the web site.

I rather like the Stryd website. There's the usual calendar views of your runs, but there is some useful analysis you can do within their website. The biggest shortcoming I've found is that you can only show data by time, not by distance. If you look at the first graph below the hill shown by the purple line looks asymmetric because I'm going down much faster than I'm going up.

Because Stryd is compatible with so many watches, it's fairly easy to get most of the data into an app for analysis.

A view of the data collected using the Garmin Connect IQ data field with Stryd also connected as the Footpod, using a Garmin Fenix 3.

I tested the distant accuracy of the Stryd using the same basic methodology as I do for my GPS Accuracy testing. (See GPS Testing Methodology for details.) I used a Polar M400 configured to use the distance from the Stryd footpod. As you can see from the results, the Stryd is remarkably accurate, far better than any GPS device I've tested. My testing of pace is more anecdotal, but I've been able to hit my target paces using guidance from my Stryd. I've tested using a range of paces from 10:00 min/mile to 6:30 min/mile and the Stryd allows me to cover a given distance in just the right time. 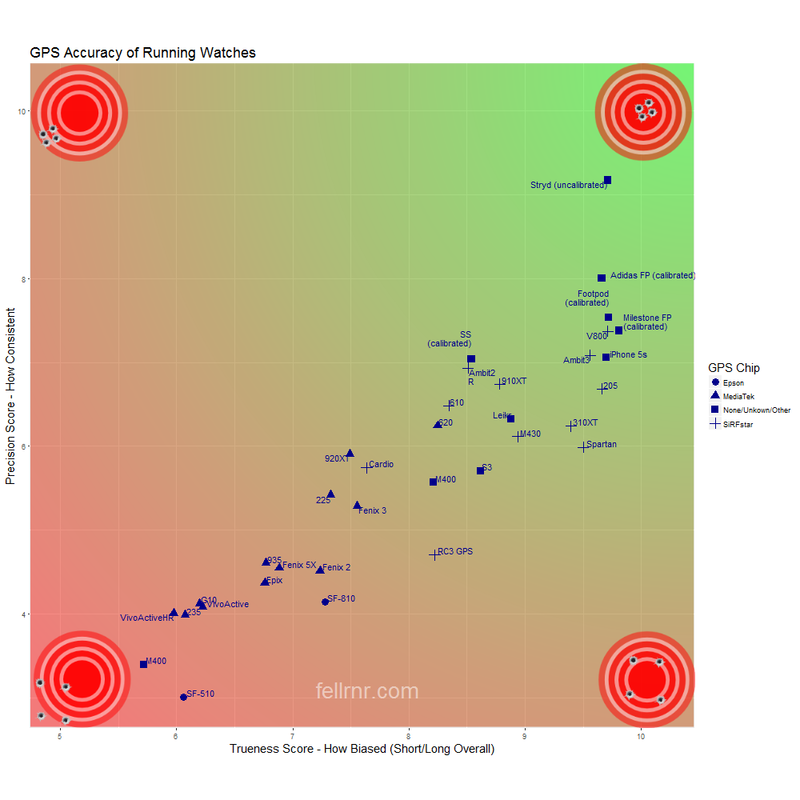 An infographic of the accuracy of the GPS running watches. The top right corner represents the most accurate watches. (This graphic uses ISO 5725 terminology.)

I don't view Stryd as a "power meter", but a way of estimating relative training intensities, rather like Heart Rate. There are some important benefits to using Stryd over heart rate for estimating relative training intensity. The graph below is showing a run up and back down a local hill. It's not a very long Hill, but it is fairly steep, averaging 6% with sections nearer 10%. The first graph below shows me running hard up the hill, then resting on the way back down. You can see that both my heart rate and power estimate rise on the uphill and decline on the downhill. You'll notice that my heart rate response rather slower to the change in intensity than the power estimate, making it more useful for providing a useful, real-time estimate of intensity. 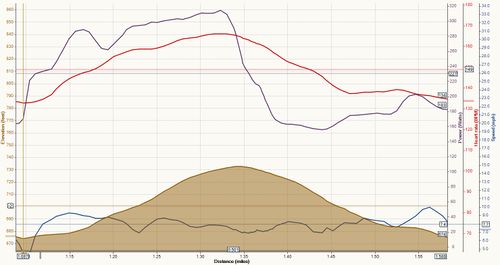 Traditional Hill training, focusing on high intensity on the way up and easy back down. Power data from Stryd, Heart Rate from Wahoo TICKR Run, elevation/distance/pace from GPS using Suunto Spartan Ultra.

Another interesting use for Stryd is to provide more even pacing on hilly courses. The graph below shows me attempting to keep an even effort based on the Stryd power estimate. My goal was to keep my intensity at about the same level as a running at 8:30 min/mile pace on level ground, which at the time of this run is about 200-210 watts and about 135-140 BPM heart rate. You can see that I was moderately successful, though both my heart rate and estimated power were a higher than my target. I was surprised by just how slow I had to go up the hill to compensate for the slope. You can see this more accurately in the lower image that's looking at the Stryd pace data. Even though my pace has dropped to 12:18 min/mile my heart rate and estimated power are both well above target. This means that to go up this hill with the same effort as 8:30 min/mile on the flat, I'd need to drop to quite a bit slower than 12:30 min/mile pace. Here the estimated power data is far more usable than heart rate, as I can tweak my pace moment by moment rather than waiting for my heart rate to adjust. I found that in practice, the Stryd estimated power output is remarkably effective at giving me real-time feedback of my exercise intensity on level ground and uphill. Though this is still a modeled, estimated power intensity, for uphill and level ground, it's far better than anything else available to us and is good enough for real world usage.

Sadly, things are not quite so rosy on the downhill sections. The graph below shows a hill repeat where I took it easy on the way up, and then pushed the pace hard on the way down. You can see that during the downhill section, my heart rate has risen a little, but the estimated power output has dropped massively. You can see my pace a little more accurately on the lower chart that uses the Stryd data, and my pace is hitting 6:30 min/mile. This matches up with my overall experience of Stryd, which consistently underestimates my exercise intensity for downhill sections of my run. This is a little limiting, as it means I come to use Stryd to pace myself when running downhill. I'm reasonably confident that Stryd will update their model to improve this, but it is currently a noteworthy shortcoming.