Is the GOrun Ultra a Hoka for only $80? Sadly not, but it's closer than you might expect, though the cost per mile probably works out higher than the longer lasting Hokas. With the updated GOrun Ultra 2, Skechers has some good improvements, but there's still some way to go before it's competitive. I've rated the Ultra as "Worth Considering." (I use The Science of Running Shoes as the basis of how I test running shoes and what you should look for in a running shoe.) 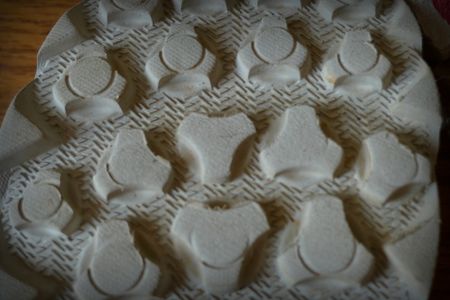 A close up of the sole, showing the wear that occurred after just 130 miles.

Skechers have made a number of good improvements over the original version. The thickness of the midsole had changed from 26/40 to 28/34, so the forefoot is thicker and better cushioned, while rearfoot cushioning has been reduced. While it's sad to see the loss of rear cushioning, this has made the drop rather less horrible. The drop is still 8mm when loaded, but at least that's an improvement. The other improvement is in the upper at the extreme rear where it wraps around the heel bone. In the original, the rear did not cup the heel at all, which was an odd sensation and I found it put undue pressure on the Achilles bursa (actually the Retrocalcaneal Bursa). Sadly Skechers did not improve the lifespan of the GOrun Ultra, and it still wears out like it's made of chocolate. For more bad news, the weight has gone up nearly an ounce.

The Hoka Clifton 2 is the best Maximalist shoe by far, combining massive cushioning with light weight. The GOrun Ultra is heavier, but offers less cushioning. The Clifton has far less drop, and lasts vastly longer, as well as being better cushioned. While the GOrun Ultra may be cheaper to buy, the cost per mile is much higher, and the Clifton is a better shoe in every way I can think of.

4 Visualizing the Attributes of the Skechers GOrun Ultra