A running parachute is designed to make running much harder work. It functions rather like the parachute that pops out the drag racing car to slow it up quickly. It may seem strange to want to make running harder and slower, is generally we're looking to make it easier and faster. However, this one time when you really want running to be hard to work, and that's High Intensity Interval Training (HIIT.) If you consider one of the classic HIIT workouts, the Tabata, you have to be running remarkably fast to hit the required intensity. Tabata used an intensity of 1.7 times the intensity of V̇O2max. To put that into perspective, if you're a three hour marathon runner you'd have to run at about 3:30/Mile, or for a four hour marathon runner it would be about 4:45/Mile. This is one of the reasons I tended to recommend people do HIIT workouts on a stationary bicycle. With the bike, you can increase the resistance so that your pushing much harder on the pedals, rather than having to spin the pedals excessively quickly. To run at HIIT intensity levels, you have to be sprinting, with a much higher Cadence as well as a vastly longer stride. This dramatic change in biomechanics is difficult to achieve, and increases the risk of injury. Running up a relatively steep hill helps, but unless you have an extremely long Hill, this doesn't work for the Tabata-style partial recovery HIIT workouts. (It works reasonably well for workouts where you have full recovery, and can gently walk down the hill between repetitions.) This is where a running parachute comes in; the extra wind resistance means you're working much harder at more moderate paces. I've tried a couple of running parachutes, and they are available relatively cheaply. I found these running parachutes work pretty well, and I can achieve higher intensity running at a much saner pace. However, there are a whole bunch of caveats you should be aware of.

I've tried two different parachutes. The first is a cheap, no brand parachute that only cost me $10 delivered from Amazon. Physport 56 Inch Running Parachute (Est. . The second was $22 at the time (SKLZ Speed Chute (Est. ) and is branded as SKLZ. Both parachutes seem to be made of pretty much identical black fabric with a silver colored lining. As near as I can tell, there about the same size. The white mesh that links the parachute to the strap is softer and perhaps slightly higher quality on the SKLZ, but there's not much in it. The biggest difference is in the strap, with the cheap parachute just having some Velcro to tie around your torso. The SKLZ has a waist strap that's much wider, and has a backpack style clip rather than Velcro to fast around your waist. It also has a metal ring at the back so that the parachute can move a little more freely from side to side without twisting your torso. There's also a clip to attach the parachute to the waist strap. The strap on the cheaper parachute is a little shorter, but not enough to make a practical difference. I found that I could attach the cheaper parachute to the ring on the SKLZ and they were both positioned equally. Personally, I would be inclined to get the cheaper of the two. 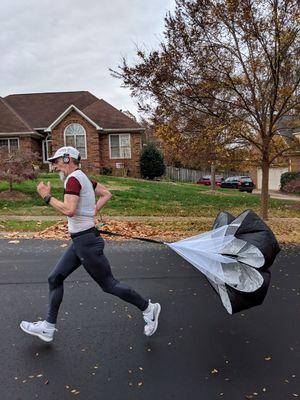 Me running with a parachute

An alternative to a running parachute would be to pull a tire (tyre) behind you. I've yet to experiment with this approach, but I suspect that it could be effective if you can find the right sized time. A smaller, space saver sized tire might provide just the right amount of resistance. The downside to a tire is the inertia, which means changing speed requires additional effort.