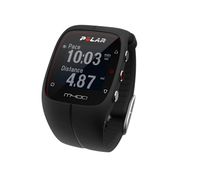 I was initially very disappointed with the Polar M400, but over time I've come to appreciate the M400 more and more. There are a number of factors, not least of which is that it now sells for far less than its release price, making it a lot more competitive. Its GPS Accuracy has also improved, though it still mediocre. This accuracy problem is offset by its reasonable support for the Stryd Footpod that is extremely accurate. The main competition the M400 faces is the Garmin Vivoactive. The Vivoactive is a better watch in virtually every respect, except for its Stryd support. In order to get the Vivoactive to get pace and distance information from Stryd you have to turn off GPS, while the M400 can use Stryd for pace and distance whilst still recording a GPS track.

The M400 is not a good choice for ultrarunners, as its battery life is too short. See Watches for Ultrarunning for more details.

I think that in most cases, at this price point you should buy the Garmin Vivoactive over the M400. The Vivoactive has far more functionality than the M400, including Connect IQ that allows for expanded functionality through downloaded apps. The Vivoactive is a vastly better activity tracker, especially when combined with a good Connect IQ watch face that gives you better feedback on how you're doing. You can even use the Vivoactive on an ultramarathon by Charge On The Run, something that much harder with the M400. Both watches will support the Stryd Footpod for extremely accurate distance and pace information, but they have different trade-offs. The M400 can still record a GPS track whilst getting distance and pace from the Stryd, where the Vivoactive has to have GPS disabled. On the other hand, the Vivoactive can display the Stryd estimate of Running Power far better than the M400, and it can record this power estimate along with other metrics such as Ground Contact Time. Therefore, I'd only recommend someone buys the M 400 if they really want to record the GPS track whilst getting pace and distance from a Stryd Footpod, otherwise by the Garmin Vivoactive.

For quite some time, the M400 had the worst GPS accuracy of any device I've tested, but recent firmware upgrades have improved matters somewhat. The GPS accuracy is still rather mediocre at best, but at least it's not as appalling as it once was. It looks like Polar are using an unusual GPS chipset in the M400. I've not seen any other device using the u-blox chipset, and the replacement for the M400 (M430) returns to using the same chipset manufacturer as the Polar V800 which has outstanding GPS accuracy. The firmware upgrade is also fixed the problem where the M400 would report losing satellite signal with the message "There's no GPS signal". This was occurring under conditions where another device is doing fine and there are not circumstances that should cause a problem

Here's the tracks from the M400 with the 1.9 firmware. This diagram has tracks color coded with green indicating good accuracy through to red indicating poor accuracy, and the lap markers as blue dots.