This chart shows the perceived temperature while running based on a specific height, weight and pace. This calculator is based on my Running Heat Model.

Normal heat indexes assume a person walking outdoors at 3 mph and generating 180 watts per square meter of skin. The original work states "higher levels of activity would increase the sensitivity to humidity… few people, however, sustain activity above the level considered here for long enough to reach a steady state". This is not very helpful to runners that are moving far quicker than 3 mph and generating a lot more heat.

The table below shows the equivalent temperatures running at 9:05 min/mile for your height (174cm/70inches) and weight (73Kg/160lbs). You can create a customized version of this table by filling in the form below 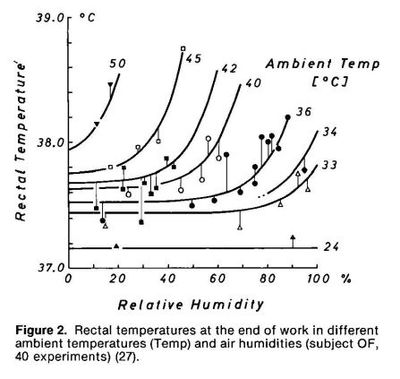