Are negative splits faster in the marathon? An analysis 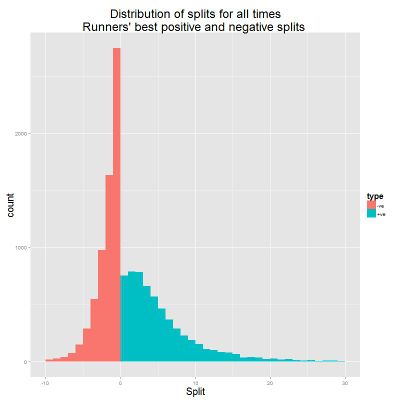 The results of 26 marathons covering 876,703 results for 754,851 runners were analyzed to look at the differences between positive splits (going slower in the second half) and negative splits (running the second half faster). Overall 13% of finishes were negative splits, with a mean split of positive 8.25%. Faster runners have a narrower distribution of splits and a mean closer to even. Looking at the 192,585 runners who have more than one finish in the same city, only 10% of the best performances are with a negative split, though a higher portion of the 2:00 to 2:30 and 4:00 to 5:00 finishes were negative. The subset of runners who have both a positive and negative split shows that 52% had their best performance with a negative split and the most common split for a best performance is negative 0-1%. Not surprisingly the biggest change in performance relates to extreme positive splits being much slower than more even splits, probably due to Going out too fast. Overall, the data suggests that it's beneficial to have a split time that is close to even, with a slightly negative split possibly being optimal.

The New York City and Chicago marathons use electronic timing that records the start, finish and half way times for runners. These races have little elevation change; NYC has around 900 feet (300m) of ascent and descent, and Chicago is effectively flat. Data is publically available for the New York marathon from 2000 to 2011 and the Chicago marathon from 1998 to 2012. (The results of the 2007 Chicago marathon were excluded as that year the race was unusually hot and temperature has a big impact on marathon performance.) The results were grouped within race location using name and age so that multiple finishes by the same individual could be compared. This gives data for 26 races, covering 876,703 results for 754,851 runners.

We have 72,259 runners with multiple entries, with the distribution shown below.

3.1 Distribution of All Splits

This section looks at the distribution of splits for all finishes. Overall, 87% finishes were positive splits and 13% were negative splits. This ratio is similar when the splits are divided by finish time, with the exception of those finishing in over five hours, where the percentage of negative splits is somewhat lower. However, the distribution of splits varies with finish time, with the fastest runners having a quite narrow distribution, and the distribution widening with each successively slower group. The peak of the curve is also at a more positive split value for slower groups. This suggests that faster runners tend to run a more even pace than slower runners.

Below is a table of statistics for the breakdown of splits, which give another view on the data. Again you can see that the faster runners have a narrower spread of splits (standard deviation) and their average splits are closer to even.

Below is an alternative breakdown of splits into positive, even and negative splits by finish time. For this table a split is considered even if it is +/-0.5%.

This section looks at the finishes of runners with more than one finish in a city. This allows us to look at which split percentage resulted in their best time. This is a much smaller subset of the results, including ~22% of the overall results (192,585 of 876,703). For this subset of finishes the elite runners (sub 2:30) have a higher percentage of negative splits, but runners finishing between 2:30 and 5:00 have a lower percentage of negative splits when compared with all finishes shown above. The most significant difference however is that the best splits have a much narrower spread; that is the best splits are generally closer to even, with fewer finishes in either the extreme negative or positive range.

Below is the alternative breakdown of splits into positive, even and negative splits by finish time.

3.3 Distribution of Best Performance for Runners with Both Positive and Negative Split

This section looks at the best performance from runners who had both a positive and negative split result. This is a much smaller subset of the result, including just 12,425 finishes (1.4% of the finishes, 1.6% of the runners). Of those runners, 52% did better with a negative split and 48% on a positive split. If we look at the distribution by finish time, we see that not surprisingly the faster runners run close to even splits, with just a couple of percent variation. As the finish times get longer, so the distribution of the split percentage flattens out.

Here's a tabular breakdown of the same data.

Below is the alternative breakdown of splits into positive, even and negative splits by finish time.

These graphs show all finishes, and as you would expect given the overall distribution of splits, there is a general bias towards positive splits. Further details given under each image, but there are some general trends:

These charts map all combinations of finishes for all runners with more than one finish in a race.

Like previous sections, these graphs look at runners' best positive and negative split finishes. Because only positive to negative splits are compared, only those two quadrants are populated.

6 Variations by Age and Gender

The distribution of splits does not vary much by age or gender.

There are a number of possible errors within the data.

Obviously it is not possible to draw causal conclusions from this type of data.