Morton's Neuroma is a common problem in runners, and there are a number of simple fixes you can try before resorting more drastic solutions like sclerosing or surgery. A Morton's Neuroma normally causes a burning pain in the forefoot, just behind the 3rd and 4th toes (sometimes behind the 2nd and 3rd toes). The pain often radiates towards the toes, and sometimes there is numbness rather than pain. The underlying cause is inflammation of the nerve between the bones of the forefoot, often triggered by narrow or tight shoes. I have had good results with the simple fixes described below, and I have had reports of other runners with similar success.

A Morton's Neuroma is not a true neuroma, which is a tumor that is generally benign. Rather, it is an enlargement of the nerve where it goes between the metatarsal bones of the foot. Because the nerve no longer fits between the gap, the pressure causes pain and sometimes numbness. This enlargement of the nerve is often an inflammation due to irritation. If the forefoot becomes compressed due to shoes that are too narrow, the nerve becomes damaged and inflamed. This inflammation means the nerve no longer fits in the space between the bones, creating further irritation and more inflammation. If this vicious circle can be broken, the problem may be resolved. However, in some situations the nerve can have fibrous tissues formed around it, which may require the destruction of the nerve or surgical removal.

The classic symptoms of Morton's Neuroma are a pain on the lower (plantar) surface of the foot, located between the 3rd and 4th metatarsal heads, though it can happen less commonly between other metatarsal's. The picture below shows the location of the inflamed nerve. The pain can be dull or sharp, and is often burning, occasionally radiating to the toes. Sufferers often find that removing footwear or massaging the area helps relieve the pain.

There are other problems that can have similar symptoms to a Morton's Neuroma. The most likely problems are a stress fracture (or stress reaction) and intermetatarsal bursitis.

While rare, it's also possible for the symptoms to indicate a sesamoid fracture, nodules associated with rheumatoid arthritis, synovial cyst, soft tissue chondroma, and plantar fibromatosis. I talked to one runner who had symptoms of a Morton's Neuroma which turned out to be caused by large calluses under the forefoot.

Morton's Neuroma is not easy to diagnose clearly, but these are the primary tests.

A Morton's neuroma can be a difficult thing to fix once it flares up. The longer the symptoms persist, the harder it can be to fix the problem, so don't ignore it. I recommend starting with conservative approaches before resorting to surgical intervention.

I found that using "Comfy Toes Foot Alignment Socks" has provided me with more relief than any of the other treatments I tried. A similar product is Happy Feet. These socks are intended to be used so that they stretch the gap between each toe, as shown below. I wore the socks like this overnight and found it helped quite a bit, but it did trigger quite a bit of pain as the toes were stretched in the night. (You can see the scar tissue on my feet from Epidermolysis Bullosa.) 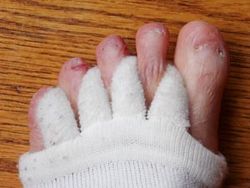 This is how the socks are supposed to be used. 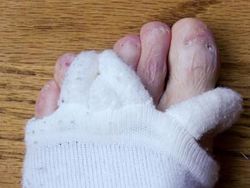 This is the way that I found to be most effective.

There are plastic toe spreaders such as Pampered Toes, but I didn't find them as comfortable.

I routinely cut open the toe box of my shoes to allow my toes to spread while I run. This prevents blisters of the toes, and I believe it also increases my biomechanical efficiency. However, when I had a Morton's neuroma I cut far more of the shoe a way to prevent any pressure on the sides of my forefoot.

A friend did a rather more subtle change, opening up just the sides where the forefoot touches the shoe

Minor modification, cutting open the side of the shoe
Retrieved from "http://fellrnr.com/mediawiki/index.php?title=Mortons_Neuroma&oldid=7084"
Category: