Difference between revisions of "Long Run"

This is a stub article that is under development. Please ignore until published.

A long run should be far enough for the distance to present a stress on the body. It should be sufficient stress that it takes a day or two to recover from, but no more. If you still feel the effects of the long run on the third day, the long run was too far. If you bounce back to normal the day after the long run, it’s probably not far enough. For some runners this distance might be 30 miles, for others it may be 2 miles. I believe it’s okay to feel quite tired for the rest of a day after a long run, but complete exhaustion and the need to sleep may indicate too much distance. If you experience Delayed Onset Muscle Soreness after a long run, then the run was too far and the distance and/or pace should be cut back quite a lot. 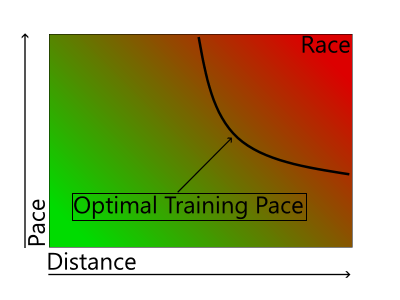 The goal with a long run is to cause enough stress to trigger adaptation and increased fitness, but not so much stress that a protracted recovery is required. The diagram above shows that an ideal long train run will generally be both shorter and slower than the race itself. The long run can be as long as the race at a slower pace, or as fast as the race at a shorter distance. A good training program should include a mixture of paces and distances. Note that the effort of the long run goes down as the paces slows up, but there is a minimum pace for each runner. Running slower than that pace can actually be harder and cause more stress on the body. A 14 minute/mile pace is the point were running becomes less efficient than walking, but the slowest efficient pace may be faster than that.

Most training plans call for a long run once per week or once every other week. I would suggest that once per week is reasonable for most runners, as the long run should not leave you tired or impaired for more than a couple of days. There will be lingering effects that last for a week or more, but these should not prevent another long run seven days later.

Some training plans have weekly long runs of increasing difficulty for three consecutive weeks, then a shorter long run on the fourth week. This fourth week is usually called the 'cutback week'. This type of cutback may be of value if the training plan does not include sufficient rest for recovery in the normal routine, but I believe that a plan that calls for running 3 or 4 days per week is more effective. If a cutback week is used, I'd suggest not doing a long run at all and focusing on maximum recovery.

6 Shortest long run for a marathon

For marathon training, I would consider 16 miles to be the shortest distance that helps prepare for a marathon. There are some programs, such as Hanson, that have 16 miles as the longest long run, but I don’t believe that provides sufficient training for most runners.