How Often To Run

There is a natural human belief that if some is good, more is better. This idea is all too often false, and can be destructive with training. There's an old adage that "running does not make you a fitter, it's the rest that follows running that makes you fitter". Getting the right balance of running and rest is a critical part of your training, and there are a number of factors to consider. I've reviewed the available research (see below) and literature to come to some initial conclusions.

Putting this together, it suggests a workout plan should fit this outline.

It's well accepted that exercise is a critical part of improving fitness, and there are many different Endurance Adaptations that occur. The primary mechanism for these adaptations is that exercise causes damage and this damage is repaired to be stronger than before the exercise. This is seen in the fatigue that occurs after exercise, and the need for rest. The term for this mechanism is Supercompensation, and is a key principle for creating training programs. 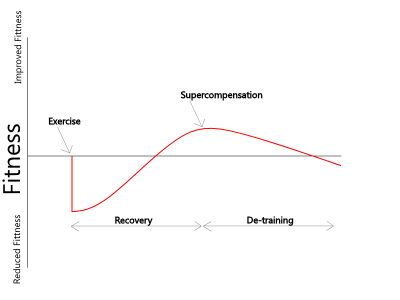 Supercompensation is the idea that exercise initially weakens the body, but it repairs itself to become stronger.

The recovery required for longer or downhill running incurs more Delayed Onset Muscle Soreness (DOMS), which has a much longer recovery time. Most training plans have longer runs every 7 or 14 days, but the research suggests that the actual recovery period will depend on the severity of the DOMS. Recovery periods could be as long as 30-90 days, which is obviously so long that detraining is likely. In practice, I believe that we need to invert the problem. Instead of working out the recovery period for the long/downhill running, we need to optimize the running impact so that recovery occurs in the right time period. A long/downhill run that produces performance deficits that are not resolved well before the next long/downhill run are too stressful and the effort needs to be reduced.

3 The Science of Recovery

Below are the studies I've found looking at the timeline of recovery from exercise stress. Overall, the time to recover from varies enormously between different types of training and different subject groups. My conclusions from the research are that HIIT can be recovered as quickly as 24 hours, short race distances in 48 hours, but marathon, ultramarathon, and DOMS inducing exercise can potentially take weeks to recover from. Importantly, subjective feelings of recovery seem to be inadequate in evaluating the actual recovery.

3.1 Recovery from Eccentric and Downhill Exercise

Because running always involves an eccentric component, this modality is quite important as it produces DOMS. The eccentric component is particularly important for endurance running, especially when it includes downhill running. The immediate muscular weakness that occurs with eccentric exercise compromises performance in longer runs. The repeated bout effect, which provides significant subsequent protection from DOMS has to be carefully balanced with the potentially elongated recovery periods. The research suggests that recovery can take many weeks, something that is likely to produce impaired subsequent training.

The research into shorter distances suggests that even race efforts at 5-10Km can be recovered from in 48-72 hours.

The research shows a wide variation in recovery times from a marathon, with as little as 5 days to greater than 7 days. No studies checked for longer than 7 days, which means we have no indication of the upper limit. My personal experience is that recovery from a marathon can often take more than 14 days for those unused to the distance, but with practice, recovery can be as short as 48 hours. Much of the difference seems likely to do with resistance to DOMS that occurs with repeated bouts.

There is even less research into ultramarathons than marathons, but not surprisingly, recovery from an ultramarathon effort can be protracted. It's unclear if ultramarathons can produce an improvement in fitness. It seems probable that some aspects of fitness may improve (such as DOMS resistance), but some detraining may occur during the protracted recovery.

There are many studies on strength training, but the one below is noteworthy as it calls out the time supercompensation. After all, maintaining baseline performance is not the goal of training.

There is very little evidence of the optimal recovery from elite athletes that I could find in the available research. However, it's been noted[22] that the improvement in performance after a Taper suggests that athletes are typically under-recovered. This improvement is typically 2%, with a range of -2.3% to 8.9%, which is a huge benefit for an elite athlete in such a short period[23].

4 The Science of Measuring Recovery

A key problem in knowing how frequently to train is measuring recovery. It seems intuitively obvious that different modes of training and different training loads will result in different recovery periods. Running an easy mile will result in no appreciable need for recovery, while running hilly 100-mile race could leave me impaired for weeks.

5 The Science of Training Frequency

There's relatively little research that goes beyond recovery into training frequency and recovery from repeated bouts. There are some indications that lower frequencies might be more effective it's hard to be more definitive. Based on the research above on recovery, it seems likely that the specifics of the exercise may have a huge impact on the appropriate frequency.

6 The Science of Active Recovery

6.1 Other Uses of the Term "Active Recovery"

Note that "Active Recovery" can have other meanings:

The FIRST plan is based around running three days a week, and is the only plan I am aware of that has undergone scientific evaluation about its effectiveness. Hal Higdon's Advanced II Marathon[30] plan has 6 days of running, but two days are trivial. Jeff Galloway[31] uses four days/week. The Runner's World beginners plan [32]is four days/week. (The RW intermediary & advanced are 5 days.) Jack Daniels defines just two work outs a week, and leaves it up to you how you fit in the other miles.

Running hard or long everyday will build up cumulative fatigue as the body does not have sufficient time to recover. If this is kept up to long, then some type of failure will occur; either injury or some form of Overtraining. However, it is possible to run for a number of days consecutively, building up deeper cumulative fatigue, and then taking a longer rest period. This is one of the principles of the Three Phase Taper.

Running 3 or 4 days/week does not mean running at most once per day. It can be effective or necessary to run more than once per day while running fewer days per week. Running more than once in a day can provide some of the training stress of a single longer run.