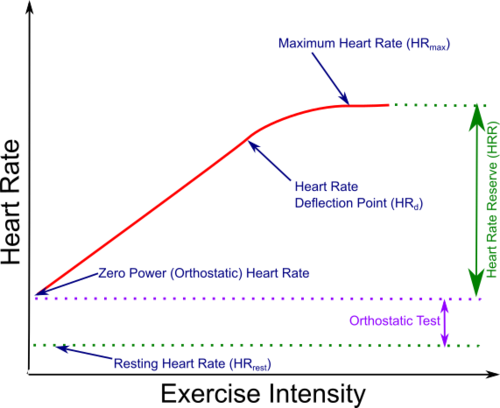 The heart rate deflection point is a controversial way of establishing an athlete's Lactate Threshold (LT), sometimes called the Anaerobic Threshold (AT). The Lactate Threshold is where the body starts to rely more on producing energy anaerobically (literally without oxygen) rather than aerobically (literally with oxygen). The best way of measuring the Lactate Threshold is to take a MLSS test, but this requires the analysis of blood samples. This is obviously invasive, inconvenient, painful and somewhat expensive. In 1980, Italian sport scientist and medical doctor Francesco Conconi developed a test procedure for establishing an athlete Lactate Threshold based on heart rate. The idea behind the test is to have the athlete exercise of gradually increasing intensity while recording their heart rate. When the athlete starts to produce energy anaerobically, their heart rate will not go up proportionate to the intensity. This change from linear relationship between heart rate and intensity is called the Heart Rate Deflection (HRd).

The Conconi test was described in a 1982 paper[1] and refined in 1996[2]. The original test is performed on a 400 m track with a heart rate monitor that will record the test. After a thorough warm-up, the athlete should run at a comfortable pace for 200m, and then increase their pace slightly at each subsequent 200 m. Is the time to cover each 200 m segment needs to be recorded, and this can be done by hitting the lap button on the heart rate monitor. The original Conconi test called for the athlete to increase their pace by 0.5 Km/hr, which is remarkably tricky. A modified test has the athlete increasing the pace by 2 seconds per 200 m interval. The test continues until the athlete can no longer runs of the required pace. The 1996 test changed the protocol to increase the pace in a more uniform rather than using steps, and changed to time rather than distance, with increases every 30 seconds.

The Conconi test is remarkably controversial, with many potential issues[3].

It is possible to measure the lactate level in the blood using a device similar to a blood glucose meter[4]. Just like a blood glucose meter, a small drop of blood must be drawn and applied to a disposable test strip. This process is rather tricky when exercising at high intensity, and stopping to draw blood will obviously interfere with the exercise level. Lactate meters cost $300-500, with this test strips costing around $2/each.