The Garmin Vivoactive is the cheapest watch to support Garmin's Connect IQ, and the current pricing puts it into the budget category of running watches. So far I've got mixed feelings about the Vivoactive; it's a mixture of generally crippled functionality, poor GPS Accuracy, no Pace From A Footpod, but it's small, fairly cheap, has some surprising extra functionality, and it has a nice user interface. (I'm still testing the Vivoactive, so this is just my initial impressions, not a full review.)

The Vivoactive has a reasonable size color display given its small dimensions, though the bezel is larger than you might expect from the latest watches. The resolution of 30K pixels makes it look sharp and clear. The colors are pretty good, and color does make a watch more appealing even if it doesn't add much to the functionality. The standard watch face is quite uninspiring; it makes me think Garmin intentionally set the bar low for developers of custom watch face apps. 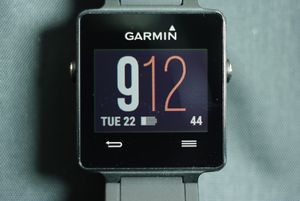 The Vivoactive supports Garmin's Connect IQ that allows for various apps to be installed, including this custom watch face called "Actiface". I love this display, which shows a lot of data in a small space. There is a graph of the last week's steps and calories, a circular progress bar for today's progress towards you step goal, plus some badges for things like hitting your step goal for four days in the last week. The Vivoactive supports Connect IQ for Watch faces, Apps, Widgets, and Data Fields. It includes most device profiles: Heat rate, footpod, temperature, cadence, speed, controls, and power meter. 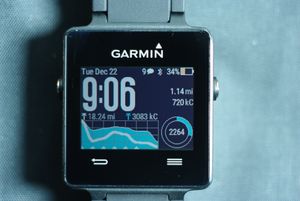 The Vivoactive menu is a little different to Garmin's Forerunner or outdoor ranges, but it works reasonably well. It's designed with a touch display in mind, so you can't operate it with just the buttons. This can be an issue when wearing gloves, but I've had no issues using the touch screen in the rain. In addition to the touch screen, there are two hard buttons, one on either side, and two touch buttons just below the screen. 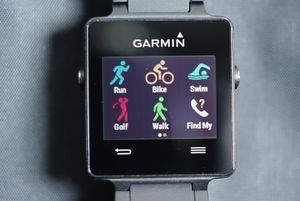 I'm a big fan of having Cadence alerts, which are easy to set up. I'm pleasantly surprised that this feature is included on a watch that has generally been crippled. 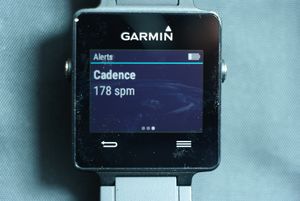 Here's the cadence alert going off, along with a vibration. 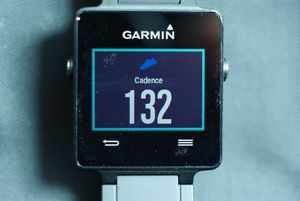 I was surprised to find the Vivoactive has support for Garmin's temperature sensing pod. This is something generally only found in their outdoor range. There's no built in thermometer, but I find they don't work well as your wrist is typically at a different temperature to the ambient air. 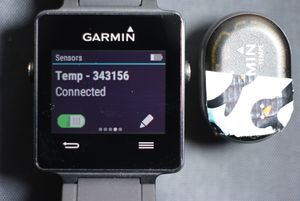 The Vivoactive can be charged on the run, which makes is a candidate for ultrarunners. You have to set the Vivoactive (and some other Garmin watches) to "Garmin Mode" for it to work when charging the battery on the run, but once you do it works nicely. 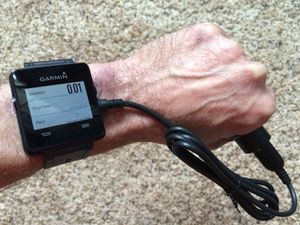 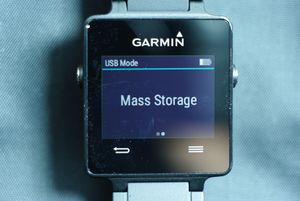 I rather like the ability to configure how long the vibration alerts buzz for. It's a small feature, but nice none the less. 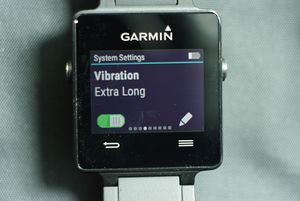 The Vivoactive has Garmin's standard display of activity tracking. It's rather uninspiring, showing the steps numerically and graphically, along with a guestimate of calories and distance. 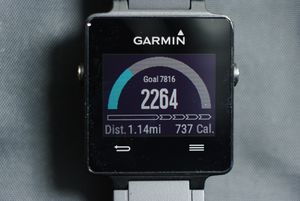 You can set repeating reminders for things like drinking or eating, as well as custom texts. 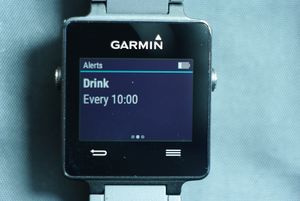 There is simple "back to start" navigation on the Vivoactive, where it displays a directional arrow and distance to where you started the activity. The arrow is not a compass, so you need to be moving for it to point in the right direction. 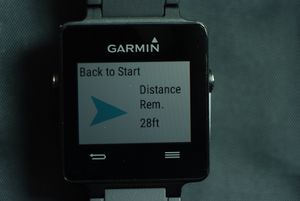 You can connect to Garmin Live Track, which will allow people to see your run as it progresses. This seems to work fine, and the Vivoactive will support Ant+ devices (HRM, etc.) while doing Live Track. I'm not entirely convinced by the usefulness of this; after all if you're carrying your smart phone, you could use that directly. 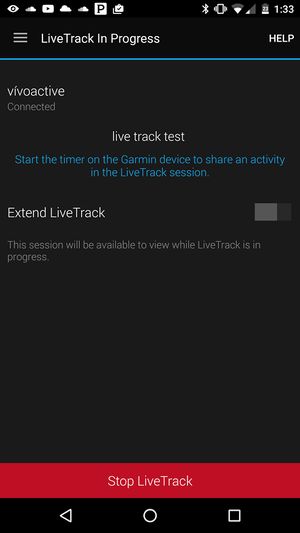 It's too early for me to give details of the GPS accuracy, but my initial testing indicates it's rather poor.

There's support for a Footpod but sadly no support for Pace From A Footpod. This means that you won't get an accurate idea of your current pace, though it's possible that Garman might and this in a future firmware release. 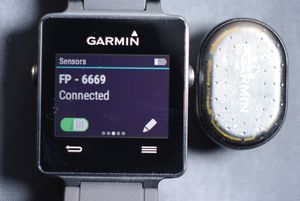 One of the more annoying bits of intentional crippling of the Vivoactive is limiting it to just three pages of data. This seems rather gratuitous and irksome; I realize that Garmin want to create differentiation across their model range by using software, but I find this a little egregious. 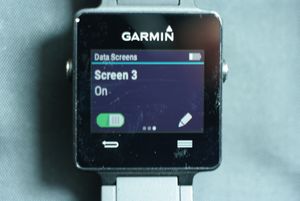 Not only are you limited to three pages of data, each page has exactly three fields. I generally like to have four fields displayed, something the Vivoactive's display would handle easily enough. Occasionally I like to have a single field display so it's easier to read, either in low light conditions or when there's one big of data I need to focus on. This restriction to just three data fields as another bit of crippling. 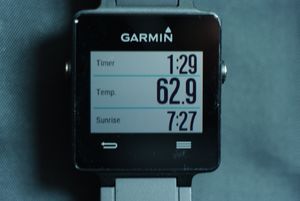 The Vivoactive gives no summary data when you've finished your run, another example of intentional crippling of the watch. A simple indication of time, distance, and pace would seem the least they could do. (You can access the details via the history menu.) 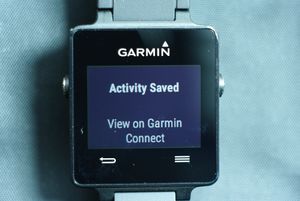 To offset the lack of save summary slightly, the Vivoactive shows time, distance, and pace when paused. 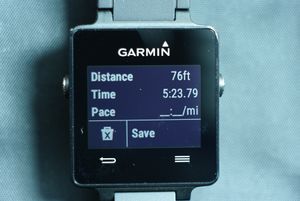 In an unusual bit of crippling, the Vivoactive can set its clock from your connected phone or manually, but not from the GPS signal. 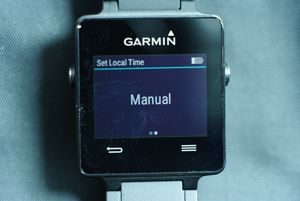 The find my phone option is useful to those of us that are absentminded and can never remember where we left it. 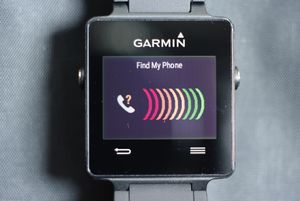 Like other smartwatches, you can get your text messages displayed on the Vivoative when it's connected to your phone via Bluetooth. 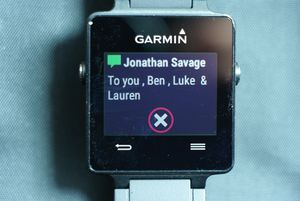 You can get weather details on the Vivoactive, but it needs a Bluetooth connection to the Garmin Connect app to function, so it just saves you the effort of unlocking your phone. 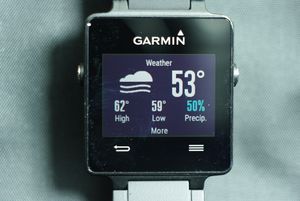 You can control you phone's music playback. I prefer a dedicated music player, but I know many runners use their phone. 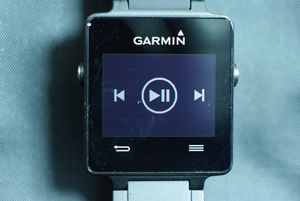 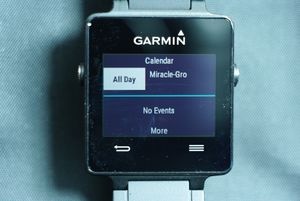