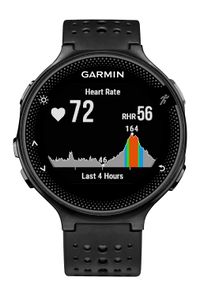 The Garmin 235, showing the display of heart rate.

I had remarkably high hopes for the Garmin 235. I was naïve enough to think that it would be like the Garmin 225, but with better Optical Heart Rate Monitoring, better GPS Accuracy and adding in Connect IQ to boot. Sadly, the GPS accuracy is even worse and the optical heart rate monitoring is still not viable. The 235 has some cool novelties, but if you look at the four basic questions I use to evaluate the foundational capabilities of a running watch, it comes up short.

The 235 is not a good choice for ultrarunners, as its battery life is too short. You can charge the 235 while you're running, but I'd recommend getting a watch with a longer battery life so you don't have to charge it so often. See Watches for Ultrarunning for more details.

Garmin produces three similar watches; the base 230, the 235 that adds Optical Heart Rate Monitoring (OHRM) to the base 230, and the 630 that adds extra functionality to the base 230. I don't see that the additional price of the 630 is worthwhile, so if you don't want the OHRM then go for the 230.

The Garmin 235 did a rather worse than even I expected, and I had remarkably low expectations. The images below back up the more rigorous statistical analysis to your find on my GPS Accuracy page. Given that the Garmin 225 did worse than the Garmin 620, and the 225 is essentially a 620 with Optical Heart Rate Monitoring, it's possible that the 230 or 630 might do a little better than the 235. However, even if those invariants are proportionally better, it's still a really grim level of inaccuracy.

I've gathered all the results of my testing under my Optical Heart Rate Monitoring page.

8.1 Score Breakdown without a Footpod

8.2 Score Breakdown with a Standard Footpod

8.3 Score Breakdown with a Stryd Footpod