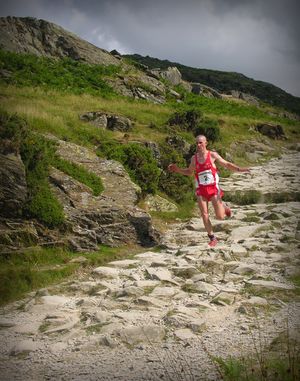 Skill at downhill running is critical to many trail races, as you can see in this image of Tim Davis on his way to win the Snowdon Race in Wales. Image by Denis Egan.

Downhill Running builds strength and endurance in a way that can't be achieved on the flat. Downhill Running causes more muscle damage, which in turn creates resistance to that damage in the future.

Many running plans include some "hill training", which generally consists of either running a hilly course, or running hard uphill to build strength, aerobic and anaerobic capacity. While these techniques can be useful, they do not provide the benefits of downhill training. While running uphill requires more energy, running downhill causes more DOMS, and one of the critical benefits of DOMS is that it triggers a change to the structure of the muscles. This structural change creates a protracted resistance to future damage. By focusing on downhill running, I've been able to run 100 mile races without any Delayed Onset Muscle Soreness. Focusing on the downhills is a critical training tool, and sadly one of the most ignored. While downhill running has obvious benefits for hilly races, it also protects your muscles from the damage of long distance races even on flat courses.

2 The Damage and Benefits of Downhill Running

Downhill running is tough for several reasons, but the main one is that downhill running does more muscle damage. This damage causes immediate weakness in the muscles, as well as soreness in a day or two. If you've ever run a long steep descent and felt that your legs are numb or shaky, you've experienced this damage. The good news is that the more downhill running you do, the more you muscles adapt to be able to handle the strain. The images below are from sections through a muscle that has been damaged by downhill running. For details on the science behind downhill running, see Delayed Onset Muscle Soreness.

There are various approaches to downhill training, each with their own benefits. By far the best approach is the Treadmill Descent, but you have to have a good treadmill you're prepared to abuse.

The simplest approach to downhill training is to run a hilly course. Ideally, find a route that includes hills of varying steepness and length. It's important to focus more on the downhill sections that the uphill, which is a little counterintuitive. This approach can be thought of as a "Downhill Fartlek".

Performing structured interval training around downhills is far better than simply running hilly courses, but not as effective as Treadmill Descents. If you don't have access to a treadmill that can be used for descents, then use these intervals. Start off with stage 1, and then build up through the stages based on your recovery. Each workout should leave you with mild DOMS that disappears in a day or two, so once you have no soreness in a given stage, move on to the next.

When you run a hilly course or perform Downhill Intervals your legs will significantly recover on the uphill sections. If you have access to a really long hill then that will help, but for many of us, we don't have a multi-mile steep descent to use. Even if we did, the time taken to run up the hill reduces the time we can spend on the downhill. The answer is to run Treadmill Descents which allow you to run steeply downhill for extended periods.

Cadence is always important in running, and especially in Downhill Running. Your Cadence should be faster downhill than on the flat, to help reduce the impact on your body. You must remain in control when running downhill; if you feel out of control or that you are flailing, you should slow up. You should try to combine the high Cadence with being relaxed and avoid tensing up. I find it important to keep my hips and back relaxed, otherwise a slight misstep will jar my back badly.

Running efficiently downhill can make a significant difference to race performance. Running hard up the hills and recovering on the downhill makes for slower race times. An increase in intensity will make a small difference to the uphill pace, but it can make a large difference to the downhill pace. I've found that downhill training helps with flat races, especially longer ultramarathons. All running involves some of the stresses that cause Delayed Onset Muscle Soreness, and having resistance to this damage can keep you strong through to the end of the race. I consider downhill running one of my Running Breakthroughs.

6 The Difficulty of the Boston Marathon

The Boston Marathon is notorious for its difficulty and the famous "Heartbreak Hill." However, the reason Boston is a tough marathon is not the ascent up Heartbreak Hill, which is only about 90 feet/45 meters high, but the preceding descents that gradually destroy the quads.

The profile of the Boston Marathon.

7 The effect of steepness on DOMS

In my experience, the steeper descents produce a disproportionately severe level of DOMS. This is probably due to the muscles working at a longer length, as most[2][3] (but not all[4]) studies indicate longer muscle lengths produce greater DOMS. I've found when doing Treadmill Descents that a small increase in angle causes a lot more DOMS.

Before starting the Treadmill Descents I would have massive DOMS after a 100 mile race, often hitting 4 or even 5 on the DOMS Scale. After many months of Treadmill Descents I've been able to run 100 Miles with little or no DOMS. I still have muscle damage and fatigue, but nothing like the problems I had before.

A friend sent this feedback to my local running group…
I have enjoyed listening to Jonathan's thoughts and advice on many running topics, but one that I always struggled with was "running uphill is easy, it's the downhill that's hard." Now, on a theoretical level this made sense, because maintaining even effort on the uphill simply means shortening your stride, while running downhill can be a balance between going faster and maintaining control. My personal experiences with hill running have not been that they are easy. I'll be cruising along and see a hill approaching; my Heart Rate will surge in anticipation and I will grit my teeth in preparation for the charge up the hill. It doesn't help that there's also a little voice saying "you're going to have to run it twice." So here is my breakthrough for the day: I allowed myself to run easier on the uphills. Rather than tighten up in anticipation, I focused on staying relaxed, telling myself that it was OK to slow down, just keep my feet light and my turnover quick. Now, rather than exerting extra effort, I was Breathing easier and before I knew it I was over the top. I've always done pretty well going downhill, but I focused on an even effort and lengthened my stride only as much as necessary. An important note: it takes concentration on the downhills - you end up going pretty quickly, and you really don't want to get distracted. Maybe this will help someone else; I was just so pleased with my discovery I wanted to share. Today's hilly run turned out well: 2 mi hills, 6 mi pretty flat, 2 mi hills - overall average 7:14.

Retrieved from "http://fellrnr.com/mediawiki/index.php?title=Downhill_Running&oldid=7078"
Last edited on 3 February 2015, at 14:41