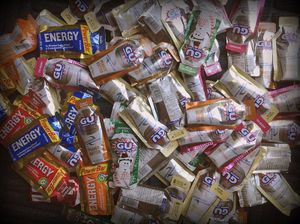 Here is an overview of the major ingredients in gels (see The Science of Energy Gels for more details).

This table is ordered by ease of digestion, which is a combination of the science of nutrition, personal experience and the experience of many runners I've talked to. 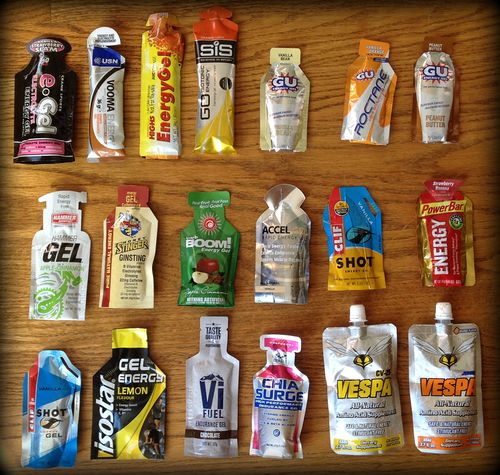 Here is a visual comparison of the sizes of the various gels.

Hammer Gel is noteworthy as one of the easiest to digest gels. It is nearly all Maltodextrin dissolved in a greater volume of fluid than other gels. The low level of sugars and electrolytes makes this far easier on the digestive system, and is recommended for runners who have issues with other types of gel. Note the low level of Fructose, which makes the maximum carbohydrate absorption lower than other gels. Therefore use Hammer only if Gu is difficult to digest.
Ingredients (Vanilla): Maltodextrin, Filtered Water, Energy Smart (Grape juice and Rice dextrins), Potassium Sorbate (as a preservative), Vanilla Extract, Citric Acid, Potassium Chloride, Salt, Amino Acids (L-Leucine, L-Alanine, L-Valine, L-Isoleucine).

For marathon distance racing, I prefer Gu over all other gels I've tried. It contains 5g of Fructose, with the rest of the calories coming from the easily digested Maltodextrin. I find that Gu can be consumed without any extra water as long as it is taken a bit at a time and mixed with saliva. Some of the flavors can be a little strong, but the 'plain' Gu has a light cola flavor. Gu is slightly thicker than other gels, which I find makes it easier to mix the gel with saliva, but it can become overly thick in colder conditions.
Ingredients (Vanilla): Maltodextrin, water, fructose, Gu Amino acids (leucine, valine, histidine, isoleucine), potassium and sodium citrate, antioxidants (vitamin E and C),citric acid, calcium carbonate, vanilla, sea salt, preservatives (sodium benzoate, potassium sorbate), fumaric acid, herbal blend (chamomile, kola nut, ginger), pectin.

The peanut butter flavored Gu is different enough to justify its own section. The peanut butter flavor is far less sweet than the regular Gu flavors, but if you like peanut butter it can be a lot more palatable. It also substitutes a little bit of fat and protein for the carbohydrate, as well as having a tiny bit more sodium and potassium. I find this flavor digests particularly well and I'd recommend trying get if you're a fan of peanut butter. Obviously, if you hate peanut butter or you have a peanut allergy this is not going to work for you. The Peanut Butter flavor is one of the thickest gels, and is quite a bit thicker than the other flavors of Gu. Even in warm conditions it tends to be a little too thick, and in cold conditions it can become bit like a chewy candy such as taffy, toffee, etc.
Ingredients: Maltodextrin, water, fructose, Peanut butter (peanuts, salt), Gu Amino acids (leucine, valine, histidine, isoleucine), potassium and sodium citrate, antioxidants (vitamin E and C), preservatives (sodium benzoate, potassium sorbate), calcium carbonate, sea salt, fumaric acid, calcium chloride, pectin, citric acid, malic acid, herbal blend (chamomile, ginger).

Roctane is a more expensive variant on Gu, though the price has reduced significantly since its introduction. The main difference is the addition of 1.7g of amino acids, which may help slightly. Roctane is not as thick as the standard Gu. I've not noticed any difference when using it, but if you like Gu and are looking for even a slight advantage, it may be worthwhile. If you are paying hundreds of dollars for a race entry and travel, then the extra cost is minor. If you take 8 gels in a 4-hour marathon, Roctane only adds $4-5 to the cost of the race. Of course, you'll need to practice with Roctane in your training, so you'll have to factor that cost in as well.
Ingredients (Blueberry flavor): Maltodextrin, water, fructose, Roctane Amino acids (Histidine, Leucine, Valine, Isoleucine), Ornithine Alpha-ketoglutarate (OKG), sodium citrate, malic acid, citric acid, potassium citrate, natural pomegranate flavor, natural berry flavor, calcium carbonate, sea salt, caffeine, sodium benzoate, potassium sorbate.

Vi Endurance has no fructose, so it's ideal for those that suffer from fructose malabsorption. It has a little fat in the form of Medium Chain Triglycerides, as well as some Taurine, which I think are good things, but probably the amount is not significant enough to make much of a difference. There is a little caffeine, intended to increase the carbohydrate absorption rather than to improve performance. I found the Vi Endurance very easy on the stomach and a worthy alternative to Hammer Gel, though it's only from the manufacturer and so it a little more pricy ($1.64 with shipping.)
Ingredients (Vanilla): Maltodextrin, water, dextrose, Vi Endurance Formula (MCT Oil, Taurine, Glucuronolactone, ornithine alpha-ketoglutarate (OKG), citrulline malate, magnesium aspartate, sodium citrate, potassium aspartate), pure vanilla flavor, potassium sorbate, sea salt, caffeine

The new formula Clif Shot uses Maltodextrin like other Gels and is similar to Gu. However, it has slightly more sugar making it a little more difficult to digest. One nice thing about Clif Shots is their 'litter leash', which is a thin strip that holds the top to the body of the packet so that you're less lightly to drop the top. I found in practice that I often break the leash when opening the gels, but the idea is a noble one.
Ingredients (Vanilla): Organic Maltodextrin, Organic Sugar, Water, Natural Flavor, Sea Salt, Potassium Citrate.

PowerBar Gel is noteworthy because of its higher sodium content that may help alleviate Hyponatremia and Cramps. I found the flavor stronger than Hammer, Gu or Cliff, but still quite pleasant. The level of fructose is higher than I'd like to see for digestibility. You may need to drink some water near the time you take PowerBar Gel due to the extra electrolytes. PowerBar Gel has a noticeably thinner consistency than most other gels, and is almost a liquid. This makes it far easier to take in cold weather as it does not go so thick, but it also make it trickier to mix with saliva in your mouth.
Ingredients (vanilla): Carbohydrate blend (Maltodextrin, fructose), water, electrolytes (sodium chloride, sodium citrate, potassium chloride), natural flavor, citric acid, sodium benzoate and potassium sorbate.

I like the 4:1 carbohydrate to protein ratio of Accel Gel, and I often use it in ultramarathon races. There is more sugar than I would like at 13g and the thin consistency makes it harder to eat slowly and mix with saliva.
Ingredients (Vanilla): Water, Fructose, Sucrose, Whey Protein Isolate and Hydrolysate, Maltodextrin, Glycerin, Natural Flavors, Salt, Ascorbic Acid, Vitamin E Acetate, Soy Lecithin.

Honey contains only simple sugars rather than the Maltodextrin that other Gels use. This makes Honey Stinger much harder to digest than other Gels, and much sweater. This is the one of the few Gels I've tried that has given me digestive problems when taken slowly. I also found the sweetness overpowering and unpleasant, though the honey aftertaste was quite nice. I would not recommend Honey Stinger Gels.
Ingredients (Gold flavor): Honey, Water, Potassium Citrate, Salt, Natural Flavors, Vitamins & Minerals, Niacinamide (Vit B3), Calcium Pantothenate (Vit B5), Pyridoxine, Hydrochloride (Vit B6), Riboflavin (Vit B2), Thiamine Mononitrate (Vit B1), Cyanocobalamin (Vit B12)

The only ingredients in this #9 are Agave and Cocoa, and Agave is predominantly fructose (55% fructose to 20% glucose). This amount of Fructose is slow to be absorbed and can be difficult to digest, making it a poor choice for most runners. The Agave makes this gel intensely sweet, which I did not like and the 'processed with alkali' means that most of the antioxidants are destroyed. This is also by far the thickest gel that I've tested so far, being more like a paste than a gel. This gel may be suitable for runners that suffer from a blood sugar drop after taking more conventional gels prior to exercise (see The Science of Energy Gels for more details).
Ingredients: organic agave nectar, cocoa processed with alkali

The ingredients in 2nd Surge are rather grim, with Agave providing Fructose and Brown Rice Syrup providing glucose (as disaccharides and trisaccharides). While this may sound better than simply using all sugar, it's chemically not an improvement, especially as Brown Rice Syrup has a bitter aftertaste and unfortunately may contain arsenic. I found that 2nd surge was overly sweet, with a slightly bitter undertones and rather gritty in texture. 2nd Surge has a higher dose of Caffeine than most gels. It's unlikely that you'd want to take a 2nd surge every 30 minutes, but if you did, you'd have 800mg of Caffeine during a four hour marathon, which is rather high. (For a 150 pound/75Kg person, that would be nearly 11mg/Kg, far more than seems prudent.) The ratio of carbohydrate to protein can have some benefits, but it's a 6:1 ratio, rather than 4:1 which the manufacturer claims is ideal in their Accel Gel. Overall, there seems nothing to recommend these gels.
Ingredients (chocolate flavor): Agave syrup, brown rice syrup, evaporated cane sugar, water, whey protein isolate, glycerin, pea protein isolate, cocoa, natural flavors, green tea extract, d-alpha-tocopheryl, salt, grape, pomegranate, mangosteen, goji berry, blueberry, chokeberry, cranberry, apple and bilberry extracts.