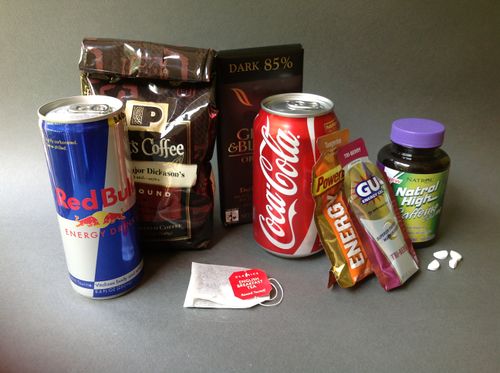 Caffeine is widely consumed by the general public and athletes, and moderate levels can improve athletic performance. Caffeine does not cause dehydration, but it can interfere with sleep. Caffeine in coffee does not seem as effective, so other sources should be used.

Man has been searching for ways of improving athletic performance since at least 400 BC, when the hearts of lion were believed to impart benefits[1]. Today, caffeine can improve performance in endurance running, and three of every four elite athletes take caffeine when competing[2]. Caffeine is one of the most widely used drugs in the world[3], with average daily intakes worldwide of 70mg/day, but higher in the US (~200mg/day) and the UK (~400mg/day)[4]. Caffeine has many effects on many different tissue types, directly and through its metabolites, as well as stimulating adrenaline release[5].

Studies have shown caffeine can improve performance by ~2%[6]. Though much greater improvements (~12%) have been shown in laboratory conditions, these are not likely to be seen in real world race conditions[6]. That ~2% represents 3.5 minutes on a 3 hour marathon, nearly 5 minutes on a 4 hour marathon. For the 5K, that represents 25 seconds on a 21 minute 5K, or 18 seconds on a 15 minute 5K. Caffeine tends to benefit fitter individuals more[6]. Caffeine may improve performance by reducing the RPE[7] and muscle pain[8].

There is relatively little research concerning the effect of tea on athletic performance. However, one study did show that the green tea extract increased fat burning and glucose tolerance during cycling at 60% V̇O2max without affecting heart rate or overall energy consumption[9].

Most studies use 3-13mg/Kg, average 6mg, but within that dose range there was no obvious dose response[6]. A smaller intake of 3 to 5 mg/kg dose before exercise and then 1 to 2 mg/kg intakes during prolonged exercise has been recommended[5]. Too much caffeine (9 mg/kg), especially for those that do not regularly take caffeine, can cause impairment, such as becoming talkative, giddy, and unable to perform simple tasks such as telling the time[5]. Low levels of exercise (30% V̇O2max) seem to increase the metabolism of caffeine[18], but higher intensities have no impact[19].

Surprisingly, there is no clear evidence that the performance benefits of caffeine vary with habitual caffeine usage[6]. Caffeine impacts caffeine naive more at rest than those habituated to caffeine, but the difference is far less during exercise[25]. Caffeine habituation has been shown to reduce the adrenaline response to caffeine, but most other responses remain similar [26]. Animal studies have shown that some tissues adapt to long term use of caffeine but other tissues do not appear to change at all[5].

Caffeine has been shown to not only reduce the pain of Delayed Onset Muscle Soreness (DOMS)[27], but also reduces the associated weakness[28][29][30]. This reduction in weakness is important because although the soreness is delayed 24-72 hours after exercise, the muscle damage and resulting weakness happens within 30 minutes[31].

Withdrawal from Caffeine generally produces a headache and fatigue, with some evidence of anxiety[4]. Onset of withdrawal is typically 12-24 hours after the last intake, though occasionally as quickly as 3-6 hours, with symptoms after peaking 20-48 hours and lasting a week[4]. Small amounts of caffeine can help with withdrawal. 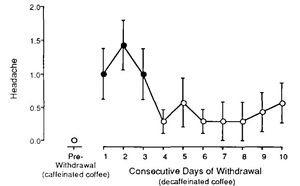 The onset and severity of headache with caffeine withdrawal. 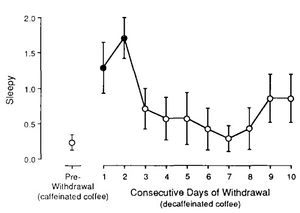 A similar chart of fatigue for caffeine withdrawal. 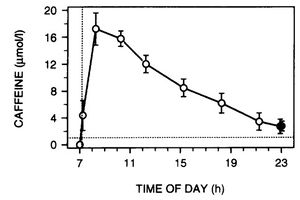 Caffeine concentrations measured in the saliva, with 200mg administered at 7:10am.

10 Caffeine as a Pain killer

Caffeine is frequently added to over-the-counter pain medication to boost its effectiveness; without caffeine 40% more pain medication is required to have the same results[37]. Caffeine adds slightly to the relief of surgical pain from Acetaminophen (Paracetamol)[38] and caffeine can reduce headaches to an equivalent level as Acetaminophen (Paracetamol)[39]. Caffeine reduces muscle pain during exercise in both those that habitually take caffeine and those that caffeine naïve[8], though one study suggested this may only occur in hot conditions[40]. As noted above, caffeine can reduce the pain of DOMS[27].

The general recommendation to avoid caffeine at altitude does not seem to have a scientific basis. In fact, a number of the effects of caffeine have the potential to be beneficial at altitude[41]

Caffeine has a shorter duration of effect at high altitude, possibly due to increased blood flow to the liver, and withdrawal from caffeine would likely make altitude problems more severe[41].

Caffeine changes the way glucose is absorbed, this effect is different before, during and after exercise.

Unlike the effect of caffeine on sedentary or resting individuals, caffeine increases the absorption, uptake and metabolism of glucose during exercise[48][49]. Caffeine taken during exercise does not change Glycogen replenishment post-exercise[50], but caffeine taken with carbohydrate after exercise increased Glycogen replenishment and insulin levels compared with just carbohydrate[51][52]. One hypothesis for this difference is that caffeine reduces the effect of insulin, and non-insulin dependent glucose pathways predominate during exercise[50]. Caffeine taken 2 hours after exercise impairs glucose absorption, but to a lesser extent than in a completely rested state[53].

There are various sources of caffeine that are sometimes used by athletes.

While coffee is a very common source of caffeine, there is evidence that caffeine taken in coffee is not as effective as other forms (see above for details). Also, coffee may cause Stomach Problems and Lower GI Problems in some individuals. Typical brewed coffee contains 100-150mg per cup[54] which compounds the problem of using coffee in sports. I would recommend using other sources of caffeine before or during runs.

[[File:Caffeine Tea Brewing Time.jpg|right|thumb|200px|Brewing time and levels of Caffeine (CF), the catechins epigallocatechin gallate (EGCG), epicatechin gallate (ECG), epigallocatechin (EGC) and epicatechin (EC)[55].] It is claimed that tea is the second most popular drink after water[56], but it does not appear to be commonly used by athletes. Because the level of caffeine can vary dramatically with different types of tea, and different brewing methods, it is difficult to know how much caffeine is in a particular drink of tea. Generally black tea has more than oolong tea which has more than green tea[57]. Typically black tea contains 28 to 46mg of Caffeine[54]. This unpredictability makes tea a problematic source of caffeine, though using the same tea and brewing for the same time will give reproducible levels, but you won't know the absolute caffeine intake.

Gels are available with and without caffeine, and the caffeinated variety normally has 25mg, though some go as high as 100mg. The higher caffeine concentrations often include a coffee extract, which may limit the benefits. Given that gels typically cost $1-2 per gel, the caffeine cost is $2-8/100mg. See Comparison of Energy Gels for more details.

The caffeine levels in soda vary widely, with some common values shown below.

Typically soda makes a poor sports drink as it contains too much sugar, is too carbonated and additives like phosphoric acid can upset the digestive system. However, ultrarunners used to regularly use soda that had been left to go flat and then often diluted with water[59]. This is something to practice in training before using during a race.

There are many different types of energy drink available on the market today. Frequently they are a mixture of many different substances that are believed in some way to be stimulating. Energy drinks should be used with caution, as the substances they contain may not have been scientifically evaluated, especially in the combinations provided. Energy drinks often contain carbohydrate, but the specific types of carbohydrate and the concentration used may not be appropriate to athletic events. The caffeine content of energy drinks is often 200-300mg per can[60], which is quite high, but lower than a Starbucks Venti brewed coffee which typically has 400+mg[61].

I've tried a few different energy drinks, and the only one I use now is Red Bull. Red Bull is only lightly carbonated, is not too sweet for my taste, and while the mixture of glucose and sucrose is not great for sports drink, it's better than many of the alternatives. I'm not sure if the added Taurine and B vitamins are beneficial, but the combination seems to work well for me. Red Bull contains about 80mg of caffeine per 8oz can[62], which is slightly less than the equivalent volume of coffee.

Energy shots are more convenient than energy drinks due to their small size and portability. However, they concentrated form can easily cause stomach upsets in addition to the problems noted in energy drinks above.

Caffeine tablets have the advantage of low-cost, predictable caffeine content, and portability. Compared with other sources of caffeine, these tablets are 1/100th the cost. I use Natrol tables, which are 200mg per tablet. I cut them into halves using a Pill Cutter, then it's easy to bite off a smaller amount as needed. I carry these in my Portable Pharmacy.

Theanine is an amino acid found in tea, primarily green tea. Theanine calms the mind without inducing drowsiness, achieving a relaxed but alert mental state[63]. Theanine has a number of benefits:

For most people, caffeine is generally taken as tea or coffee, to the bulk of the scientific evidence around the health impact of caffeine is based on these beverages.

Both green and black tea contain similarly high levels of antioxidants[73]. Green tea contains high levels of EGCG, which has been shown to inhibit cancer cell proliferation[74][75]. This EGCG may help trigger natural cell death which in turn may help treat both obesity and osteoporosis[76]. Green tea consumption has been linked to a reduction in upper GI cancers and green team may also help with lung, liver, prostate and breast cancers[77].

Caffeine intake (coffee and other forms) is linked to lower rates of the most common type of skin cancer[78] and coffee drinking is associated with a reduced risk of bladder, breast, buccal and pharyngeal, colorectal, endometrial, esophageal, hepatocellular, leukemic, pancreatic, and prostate cancers[15].

16 Restrictions on Caffeine for Competition

Caffeine was removed from the World Anti-Doping Agency (WADA) list in 2004; prior to that it was restricted at high levels based on urine concentration[84]. It is still restricted by the NCAA at similarly high concentrations[85]. The level of caffeine intake required to exceed the NCAA threshold varies dramatically (x16) between individuals, and for a given individual at different times, with some people at risk of exceeding the permitted level on 3 cups of regular coffee per day and others able to take excessive levels[86]. A study of caffeine showed that even 9mg/kg was less than the NCAA threshold for the test subjects[87], but another study showed that doses of 9mg or above could result in a positive test for some individuals[88].

At its most simplistic level, caffeine is permitted for use in competition, so if we consider "ethics" as simply "following the rules", then caffeine is ethical. If we look at the broader ethical implications of caffeine however, things become a little more nebulous. The World Anti-Doping Agency (WADA) may consider controlling a substance or method if it meets two of these three conditions:

This comparison indicates to me that caffeine is not against the spirit of the sport, or unethical.

Newborn babies may be subject to higher levels of caffeine from breast milk than one would expect. If we assume:

We get a resulting caffeine concentration in the milk of 4ug/ml to 8ug/ml[90], which is a total caffeine intake of between 2mg to 13mg, or 0.6 to 4 mg/Kg body weight. The upper end of that level is quite high. However, the baby's half-life for caffeine is 60-100 hours, compared with an adult's 2-10 hour half-life, so the caffeine will build up over time. A 24 hour half live (which is easier to calculate) would result in about a 3mg to 26mg, which is 1 to 8 mg/Kg. I'm guessing that would result in the baby not sleeping well! Conversely, a baby whose mother takes caffeine during pregnancy and is then given formula milk may undergo caffeine withdrawal after birth[91]. Even if the mother breast feeds, the varying levels of caffeine may cause withdrawal symptoms[92]. Also, caffeine has been shown to increase fetal heart rate[93].