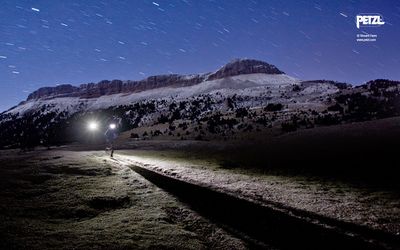 I've run with many different running lights over the years, and I've seen the quality and brightness increase as the cost has fallen. There are many good running lights on the market, but having tested many, there are just three I'd recommend, each for a different purpose. The best light for urban running, when it's more about being seen than seeing, is the Black Diamond Sprinter. It's small, rechargeable, bright, balanced, with an even light, and has a rear flashing red LED built in. However, the light I use most is the Light Belt, a waist mounted light that allows you to see the shape of the ground ahead, and I prefer it even on asphalt. And while I almost never use the Petzl e+lite, it's my faithful "oops" light I carry as a backup.

I love waist mounted lights as you can see the shape of the ground so much better. This style of light is relatively rare, and I've been pleased to work with Light Belt as they've developed and refined their product. I found this is the light I've used consistently, even for running on the relatively smooth asphalt of my local Greenway. If you've not run with a waist mounted light, I'd suggest playing around with your head mounted light, taking it off and moving it to your waist and seeing how your perception of the ground ahead of you changes. Once you've made to the switch, it's hard to go back. You can buy them at http://www.light-belt.com.

As always, there are some downsides to the Light Belt, but relatively few:

The Sprinter is my top pick for head mounted lights, available at [1].

There are some drawbacks to the Sprinter: 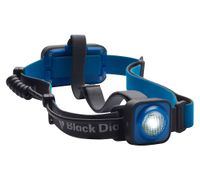 The Petzl e+Lite worth considering as a backup light, but don't use this as your primary light unless weight is of paramount importance. It's not quite bright enough for general use and the lithium batteries are pricy. However, it will fit in the pocket of my Race Ready Shorts, so it makes a great 'oops' light. I carry the e+Lite on all-day, self-supported runs where I think it's unlikely I'll be out after dark. I've misjudged things before, and an emergency light was the difference between getting home and spending the night in a snow storm on exposed fells. The e+Lite is [2]. 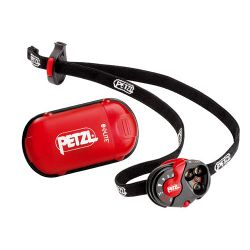 The e+Lite showing the small case it fits into.

4 What to look for

There are four factors to consider with a running light; location, the beam pattern, regulation and brightness.

The first step in choosing a light is to work out where you want the light; in your hand, at your waist, or on your head.

Most people use head mounted lights, and they have a number of advantages:

Waist mounted lights are much better at showing you the shape of the ground, and any obstacles are a lot more apparent. This is because a head mounted light aligned with your eyes so there's few shadows. Below are sets of photos taken with the Stabilized Night Camera app that allows for long exposure.

In rain or dusty conditions, a waist mounted light will not create glare in front of your face. With a head mounted light, the beam picks up the rain or dust, and because of the closeness these particles are brightly lit. It can be hard to see through these spots, and the effect can be quite claustrophobic. It doesn't capture the full difference in visibility, but it gives you a sense of how much easier it is to see in the rain with a waist mounted light.

If there are insects about, a head mounted light causes them to fly into your face, which is even more unpleasant.

I don't recommend handheld lights for several reasons. The biggest problem is that keeping the light pointed in the right direction changes your arm movement and this messes up your Running Form. In addition, handheld lights occupy one of your hands making it tricky to do anything in the dark, though knuckle lights overcome this.

Many lights project a narrow spot beam that illuminates longer distance, which can be handy for navigation, especially on ill-defined trails. Most of the time I prefer a light with an evenly diffused beam, even though it does not reach as far as a spot beam. 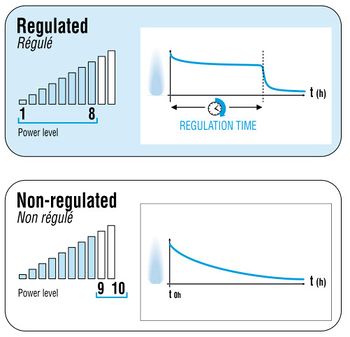 The difference between regulated and unregulated light output.

The brightness you need depends on your situation. In many cases you just need to see what's immediately ahead of you, so brightness is not critical. If you're on trails, then a really bright light can help see what direction a trail is taking, or help with navigation. A bright light can also help psychologically, as a small pool of light can become confining and claustrophobic. However, if there's a little more ambient light, then a dim light can work best. A dimmer light can provide enough to shoe you what's ahead without compromising your night vision. Having a light that will go both very bright and very dim is ideal, and several of the lights I recommend can provide both extremes.