The Altra Paradigm is a well cushioned, but it's not quite a Maximalist shoe. It aims to be like the Hoka range, but with Altra's zero drop and a human shaped toe box. There's a lot to like about the Paradigm, even though it doesn't match the Hoka Clifton for lightweight cushioning (but then, nothing much does.) While not as softly cushioned as some shoes, it does have a reasonable level of bounce from the TPU midsole, and so far, appears to be quite long-lasting (see update below.) My only real quibble with this shoe is the padding around the ankle opening which extends too far down, so the Paradigm doesn't quite grip the heel in the way running shoes normally do. I've rated it as "Highly Recommended." (I use The Science of Running Shoes as the basis of how I test running shoes and what you should look for in a running shoe.) 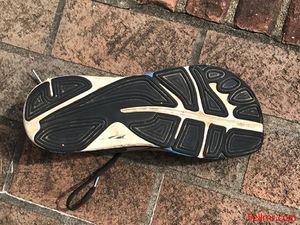 After 200 miles, there is a small amount of wear on the outsole. I tend to be rather gentle on my shoes, and the level of wear is very slight. There's a small amount of erosion under the ball of the foot and on the extreme back outside edge of the heel. The insole has compressed little, which is not surprising given how fragile most insoles are. As you would expect for a TPU foam midsole, there is very little compression so far. After 200 miles, this seems to be almost no change in how the Paradigm feels under foot.