For the 2013 Umstead race I was planning on running 5 laps (62 miles), working the aid station for 10 hours, and then finishing off the last 3 laps for the full 100. I ran the first 2 laps at an easy pace, which worked out at 2 hours each. I figured I needed to slow down to be in shape for running in the morning, so I added in more Walking Breaks and did the next two laps in 2:15 each. My final lap was much slower, mostly because I found a disabled runner and stayed with them while a vehicle came to pick them up. I then worked the aid station through the night, fixing people's blisters. I knew that I'd need to head out by 5am at the very latest to have a reasonable chance of finishing by the noon cutoff, but I chose not to for several reasons.

Next year my plan is to focus on running a fast 50 miler and then working the aid station. I believe it is possible to run the 100 and volunteer, but it would be a major effort. I'd rather put that level of effort into a straight 100 mile race.

Overall, there was nothing that went wrong on my race at all other than not having a sane plan. I should probably have done more heat acclimation, plus I need to lose some weight and restart my altitude training. However, I was not planning on a competitive race, so none of that was a problem.

I fixed numerous blisters during the night, and generally things went remarkably well. The weather was kind to us, with no rain, which reduced the number of blisters. Here are some of my notes from the night:

I was curious about the distribution of finish times at Umstead, so I graphed them based on this year's preliminary results. Notice the drop for 25 hours, probably because runners push to get a sub-24 hour finish. 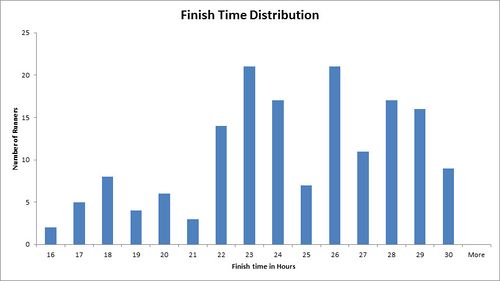 The distribution of finish times at Umstead for the 100 miler.
Retrieved from "http://fellrnr.com/mediawiki/index.php?title=2013_Umstead_100&oldid=6075"
Category: