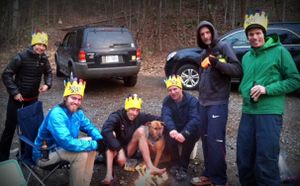 A few of us hanging out at the finish of the race.

The Sultan 50K is an informal invitation only race in South Mountains State Park, North Carolina. You have to know the Sultan or have someone who has run the race vouch for you to enter. The race a 33 mile out and back course, with a small 'lollypop' at the turn around point. The only access to aid is at the half way point, and there's 6,600 ft. of ascent, so it's more challenging that you might expect. The Sultan 50K is unusual in that your actual finish time is modified; you can get bonus minutes removed from your time for doing things like hand stands, cartwheels, Yoga poses, eating cake, etc. You can also get boner minutes added for things like not wearing your crown the whole time, not paying attention, etc. I was volunteered to mark the course, the first time I've done that in a race and it made things a little more interesting. This year a winter storm hit North Carolina, delaying the start by an hour and creating some minor traction problems in the early part of the race. Other than that, the race was a wonderful opportunity for some solitude in the Appalachian and some good Downhill Training.